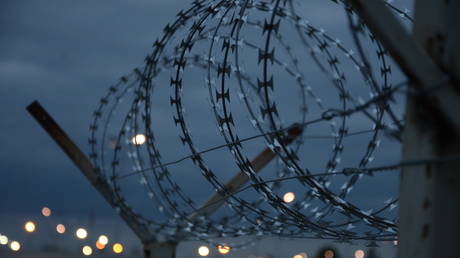 The EU border agency Frontex has acknowledged the reports, promising to investigate the situation with migrants in Bulgaria

Bulgarian border guards have been keeping irregular migrants caught at the county’s frontier in cage-like structures, some European media outlets reported on Thursday. Footage circulated by journalists suggests officials with the EU border service – also known as Warsaw-based Frontex – were aware of the situation but did not intervene.

The news was broken by Le Monde, along with Lighthouse Reports, Monitor, Der Spiegel and several other outlets. The journalists managed to film migrants that were being kept in a makeshift cage made up of iron bars on five occasions between October 15 and November 25. The makeshift prison is located in the southeastern Bulgarian city of Sredets, close to the country’s border with Türkiye, on the premises of a local police complex. On every occasion, around a dozen people were kept in the cage, which was littered with garbage and construction debris, the footage shows.

Frontex agents seem to have known about the migrants’ conditions, as a car bearing the markings of the agency was spotted at the scene. According to an internal Frontex document obtained by the journalists, ten of its agents have been permanently deployed in Sredets since the end of March 2022. Le Monde said it contacted the agency, which insisted its activities were limited to border surveillance operations and did not elaborate on its presence in Sredets.

The journalists also managed to interview four Syrian and Afghan nationals in Türkiye separately, with all of them claiming to have been detained for hours and subjected to assorted abuse.

Frontex has already acknowledged the allegations and promised to investigate them.

“Frontex treats any reports on alleged fundamental rights violations seriously,” the agency told AFP. “The information you have shared with us has been forwarded to the Frontex Fundamental Rights Office, which will look into the allegations.”

UN refugee agency UNHCR told AFP it was not aware of the media report but was still “deeply concerned about these allegations,” calling upon “concerned states to investigate all claims of violation and abuse.”

“UNHCR stands ready to provide support to the states and the European Commission in establishing independent monitoring mechanisms for monitoring and investigation of such incidents,” the UN watchdog added.

Frontex has reported an increase in irregular entries into the bloc this year, registering some 281,000 arrivals as of October. The figure represented a 77% increase compared to the same time period last year. Nearly half of the illegal migrants got into the EU via the so-called Western Balkan route, with the number of arrivals now at its highest since the 2015 refugee crisis.

Illegal migrants have allegedly been kept in a cage-like structure by Bulgarian border guards, a group of media outlets reports Read Full Article at RT.com

‘Pawsome’ ways to celebrate your dog’s…

7 children hospitalized after being found in vacant building…

Lot needs to be done to remove untouchability: Rajnath

Athlete Reveals Why He Hates Sharing A Room With Neeraj…