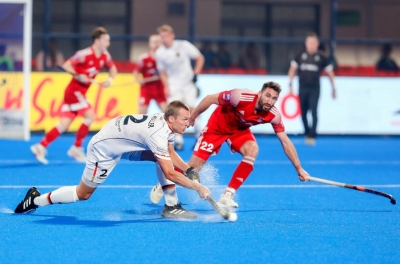 Bhubaneswar, Jan 25 (IANS) Germany registered a thrilling 4-3 win over England in shootout after playing 2-2 draw in the regulation time of the third quarterfinal to seal the semifinal spot at the FIH Mens Hockey World Cup 2023 at the Kalinga Stadium, here on Wednesday.

Germany, who had won 7 out of the 9 shoot-outs over the past 4 years, were perfect in the shoot-out, scoring all 4 of their attempts. David Goodfield missed England’s third attempt and Danneberg, who was in the goal instead of Stadler for the shoot-outs, saved the final English attempt by Ansell to give the Honamas a famous win.

It will be Germany’s first semi-final appearance at the World Cup since 2010 and they will face Australia on January 27.

Honamas were quicker off the blocks in the first quarter dominating possession and territory in the English half. They created the first big chance of the game as Mats Grambusch’s good work on the left saw Zwicker deflect his pass into the circle, onto the path of Trompertz, but his shot on the reverse sailed high and wide of the goal.

As the time moved forward, England started to find their rhythm and a free hit just outside the circle was played into the circle by Calnan and his pass in was lifted by Rushmere and at the end of his 3d skill move, the ball fell in the air to Zach Wallace and his volleyed effort found the back of the goal to open the scoring for the English.

Germany were measured in their attack in the second quarter, as the threat England possessed on the counterattack was evident. Zach Wallace nearly doubled England’s lead in the 21st minute on one such counter as he beat two defenders at the top of the circle with silky touches, before unleashing a shot, but his shot hit teammate Ansell’s foot before it could reach Stadler in the goal.

Germany won two late penalty corners in the quarter, but their first was a variation that was well read and intercepted by Albery and the second, taken by Peillat, was stopped and kicked out rather easily by the in-form Ollie Payne.

Germany were down to 10 players early in the third quarter as Oruz was given a green card for a deliberate foul to stop an English counter attack.

England made good use of the player advantage to win three quick penalty corners and they doubled their lead on the third attempt as a misplaced injection by Condon forced Ansell to improvise with a flat hit and he placed it into the bottom left corner to perfection.

As time started to wind down in the 3rd quarter, things started to get a bit fiery. Christopher Rühr earned himself a 5-minute suspension for an aggressive tackle in the middle of the field. Germany’s search for a goal to get back into the game was well stuffed out by some terrific defensive work by the likes of Alberry and Waller.

England continued to play calmly and stuffed German attacks in the midfield in the first half of the final quarter. Germany subbed Stadler out for an extra outfield player and with a little under 5 minutes to go, won a penalty stroke.

Christopher Rühr stepped up to take it, but his attempt hit the crossbar and England survived. Germany finally managed to score as Trompertz sent in a cross that found Mats Grambusch all alone on the far post and he lifted the ball into an open goal.

England then went down to 10 players as Zach Wallace got himself a green card with just a little over 2 minutes to go. England then conceded another penalty stroke as a shot by Wellen looked destined to go into the goal but instead hit an English body.

Tom Grambusch who takes penalty strokes for Germany, when on the pitch, was available this time and sent Payne the wrong way to complete the comeback for the Honamas and send the game into a shoot-out.

“My legs are still shaking, that was a great comeback, really proud of the team. We were better in the second half and to come back and draw the game in the final 2 minutes was just incredible,” said Mats Grambusch, who was awarded player of the match.

Karrueche Tran on Her Favorite Beauty Hacks and the $4…

My Pillow’s Mike Lindell claims he was ‘attacked’ at…

Worst seems to be over for Centre’s Covid ratings