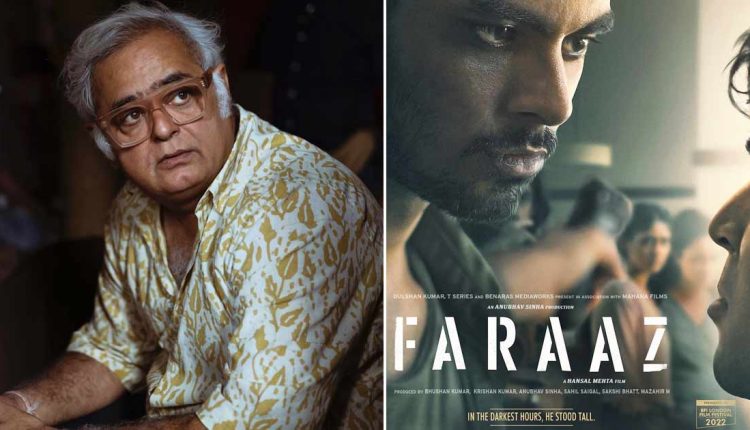 Director Hansal Mehta is back with another hard-hitting story titled ‘Faraaz’, based on the real-life terrorist attack that ravaged a Dhaka cafe in 2016, which will release on the big screen on February 3.

Filmmaker Hansal Mehta said, “To me, Faraaz is a story of our polarised times. Through the one event that rocked Dhaka – the 2016 attack on the Holey Artisan cafe – I’ve tried to explore the broader theme of violence and what really drives young, vulnerable minds towards it.”

“Designed as a nail-biting thriller that plays out over one tense night, my attempt with Faraaz has also been to shine a light on the immense courage and humanity that it takes to stand up against violence. Because standing up against bigotry and the carnage it triggers is the only way to defeat it.”

‘Pathaan’ Shah Rukh Khan Beats Tom Cruise, Next Is Dwayne Johnson! World’s Richest Actors’ List Has Him As The Only Indian (#4) Creating History
Bhool Bhulaiyaa 3 To Return With Kartik Aaryan & Akshay Kumar Would Still Be Missing? Makers Say “The Expectations Are Sky-High…”

Producer Anubhav Sinha added: “Faraaz is a story that needs to be told and Hansal has done justice to the story of the catastrophic event that shocked the world. It is a story about a hero who made a brave choice and celebrates the spirit of a young boy who stood tall for his loved ones.”

Producer Bhushan Kumar said, “Faraaz will surely strike a chord in your heart as it celebrates bravery, friendship, and humanity at its core. I am glad to be associated with such an important film.”

The film is directed by Hansal Mehta, and produced by Bhushan Kumar, Anubhav Sinha, Sahil Saigal, Sakshi Bhatt and Mazahir M. The film is jointly produced by T-Series and Benaras Media works in association with Mahana Films.

Must Read:  Hrithik Roshan Might Remarry In 2023 Officiating His Relationship With Saba Azad, Sussanne Khan To Attend As Well? [Reports]

The post Hansal Mehta On ‘Faraaz’: Attempt Is To “Shine A Light On The Immense Courage & Humanity” appeared first on Koimoi.

Yami Gautam Aiming To Do Madhubala’s Biopic, Says “I Know There Are Some Films Being Announced…”