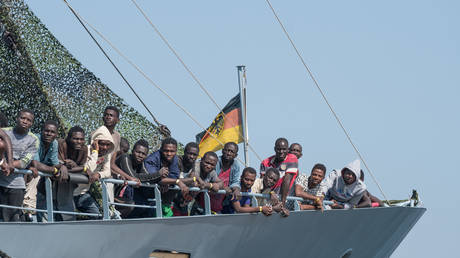 The proposed changes would only aggravate the issues with illegal migration, conservative lawmakers believe

The German government is seeking to simplify the country’s naturalization rules, thus making it easier for foreigners to obtain citizenship. However, the plan, spearheaded by Chancellor Olaf Scholz and Interior Minister Nancy Faeser this week, has already come under fire from the conservative opposition.

Germany has long been “the country of hope” for many, Scholz said in a video address on Saturday, praising the role immigrants have been playing in the nation.

“The women and men and sometimes children who came to Germany have contributed greatly to making our economy as strong as it is today,” Scholz stated. “Germany needs better rules for the naturalization of all these great women and men.”

The chancellor’s address came a day after the German Interior Ministry declared that the draft legislation on naturalization was “as good as ready.” Speaking on Friday, Faeser said the naturalization reform was “an incentive for integration,” and the proposed changes would only reflect the already existing reality.

“We are a diverse, modern country of immigration, and I think legislation must reflect that,” she stressed.

According to German media reports, the proposed changes would enable foreigners living in Germany to apply for citizenship after only five years instead of the current eight. The required residence period may be shortened even further, should applicants complete “special integration measures” such as demonstrating exceptional academic or professional achievements, partaking in volunteer work or having especially good language skills.

While not officially unveiled yet, the government plan has already met with criticism from the conservative opposition. A senior MP with the Christian Democratic Union (CDU), Thorsten Frei, for instance, argued that the proposed period for people to be eligible for citizenship was inadequate.

Alexander Dobrindt, another senior conservative lawmaker with the CDU’s sister party, the Christian Social Union (CSU), warned the changes may only damage the security situation in Germany and fuel illegal migration rather than somehow help “integration.”

“Selling off German citizenship cheap doesn’t encourage integration – it aims for exactly the opposite and will trigger additional ‘pull effects’ for illegal migration,” Dobrindt told the Bild daily on Saturday.

The opposition is criticizing government plans to simplify the naturalization rules Read Full Article at RT.com

Ishwak Singh gears up for ‘Berlin’,…

Quiz! Every England player to bat with Alastair Cook in ODIs