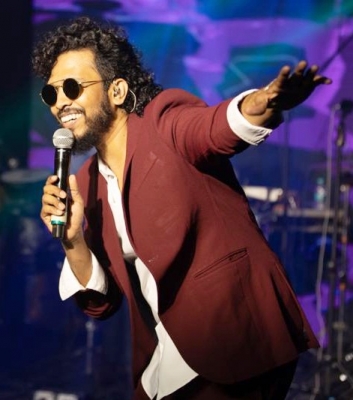 Mumbai, Nov 8 (IANS) Multi-lingual singer-composer Nakash Aziz, who started out as an assistant to A.R. Rahman, has been getting noticed for his his track ‘Keti Ko’ from Sooraj Barjatya’s ‘Uunchai’ starring Amitabh Bachchan, Anupam Kher and Boman Irani.

He revealed that Barjatya visited the studio during the recordings because for him music and storytelling are inseparable.

Shedding light on the thought behind ‘Keti Ko’ and how it was put together, Nakash said the song was designed as a celebration of friendship by Amit Trivedi. “We played around with new beats and it’s very different from populist mainstream sounds,” Aziz explained.

He went on to add: “Sooraj Barjatya ji even came to the studio when we were recording. For him songs are an integral part of the storytelling process. He is obviously a great director, who likes to be a part of the entire process. Personally, it was such a memorable experience for me.”

The singer, who started his journey as a music programmer, has belted out chartbusters such as ‘Jabra Fan’, ‘Saree Ke Fall Sa’, ‘Selfie Le Le Re’ among several others, is delighted to be in the phase of life where there are a lot of opportunities for him to showcase his skills.

Apart from ‘Keti Ko’, two of his recent songs – ‘Meri Jaan’ from the Karthi-starrer ‘Sardar’ and ‘Tara Na Tara’ from Telugu movie ‘Krishna Vrinda Vihari’ – have impressed the audience.

Talking about the exciting phase in his life, Aziz said: “Every now and then comes a phase in an artist’s life where you are filled with opportunities to do new things.”

He concluded on a note of optimism: “It is a matter of good fortune that all the different work that I have done is simply releasing around the same time, highlighting my range. I can only be grateful for the timing.”

‘Bigg Boss 16’: Gori Nagori, Shiv Thakare get into a fight over tomatoes

G20 Presidency is a measure of trust in India: PM

‘Pathaan’ director on why film worked: ‘There was a thirst SRK created for him’

Uorfi Javed Wears A Denim Pant As Her Top Surprising Netizens With Her Fashion Style As Usual, One Says “Chappal Kyun…

Randeep Hooda Uses His Recuperating Time To Explore The Writer In Him, Reveals “It Becomes Difficult To Be…”

EU to pay for most of Ukraine’s reconstruction – media

J&K govt schools must have tricolour on their signboards

Scheduled power cuts in Kiev, 3 other regions from today

Venus Transits in Aries and has a Conjunction with Rahu:…

‘Indian economy may contract 25 per cent in current…