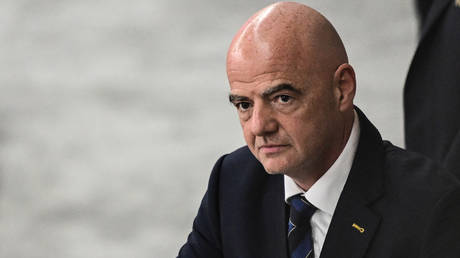 Gianni Infantino, the president of world football’s governing body FIFA, met with Swiss special prosecutors on Tuesday amid a probe into his alleged meetings with the country’s attorney general as part of a wider investigation of football officials.

Recommendations of criminal proceedings against Infantino were issued in 2020 by another special prosecutor, who has since been removed from the case by a federal court in Switzerland amid links into possible incitements to commit abuse of public office and breaches of official secrecy.

Special prosecutor Hans Maurer confirmed to the Associated Press that “a confrontation hearing was held in the proceedings,” which he held alongside another prosecutor, Ulrich Weder.

“However, I do not comment on the time, scope and purpose of this hearing,” Maurer added.

FIFA chief reacts after anger over selfie near Pele’s casket

The investigation centers around three undisclosed meetings which were allegedly held in 2016 and 2017 between Infantino and then-attorney general Michael Lauber, soon after Infantino was elected as FIFA president and after American and Swiss investigations into Infantino’s predecessor Sepp Blatter.

When questioned by the media about the meetings in 2018, both Infantino and Lauber claimed to have no memory of the issues which were discussed.

Lauber was later removed from his position when it was alleged that he had obstructed prosecutors who were attempting to discover more information about the subject of the meetings with Infantino.

FIFA has not commented on the latest development but said previously that “both FIFA and the FIFA president are fully available to cooperate with the authorities, whether that concerns meetings that the FIFA president had with the former attorney general of Switzerland, or anything else.”

Infantino is set to be re-elected to FIFA’s top job in March after running unopposed for the position for another four-year term, provided he passes an eligibility and integrity check as part of the process.

Govt mulling setting up ‘New Joshimath’ on lines of Tehri

Iraq exports over 100 mn barrels of crude oil in Jan

We did not apply ourselves: Bhuvneshwar

PDS foodgrains worth over Rs one crore go missing, godown…