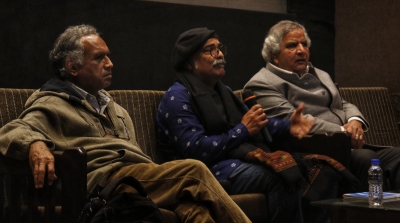 Using forgotten footages sourced from the Imperial War Museum and Cambridge University in the UK and press clippings from India and Pakistan, and juxtaposing these materials with expert narrations of this story of valour, ‘The Last Push’ reconstructs the 72 hours of the mutiny, which was inspired by the bravery of Netaji Subhas Chandra Bose’s Azad Hind Fauj (Indian National Army) and hastened the end of the British Raj.

The 30-minute documentary is based on the book titled ‘1946: Royal Indian Navy Mutiny, Last War of Independence’ written by Pramod Kapoor.

Speaking on the occasion, Pandey lauded the efforts of IANS, saying, “‘The Last Push’ is very correct choice of words for the Naval mutiny of 1946 because in any battle, the last push plays a very important role.”

“IANS has done a commendable job by making this film. The government led by Prime Minister Narendra Modi has made tremendous efforts to highlight the contributions made by the lesser known freedom fighters. The efforts put in by IANS in this direction hold special significance during the ‘Amrit Kaal’,” the minister.

Speaking on the occasion, the Editor-in-Chief of IANS, Sandeep Bamzai, said, “We have got great width and depth of the Sepoy Mutiny of 1857, but this was actually the last push because it happened immediately before Independence which came to us 18 months after it. IANS, under the ‘Freedom Series’, wants to highlight these types of rebellions and mutinies which occurred before Independence.”

After the screening of the film, director Sujay hosted a panel discussion in which Pramod Kapoor and Salil Misra, professor at the School of Liberal Studies, Ambedkar University, took part.

The mutiny was the last nail as the Britishers had to decide to leave the country as they thought that without forces, they can’t rule India for long, said Kapoor.

“There was racial discrimination. There was unpalatable food, bad living conditions that were all creating anger among the members of the Royal Indian Navy. They fought for the British and yet they were being treated like this. Being hugely influenced by Netaji Subhas Chandra Bose’s INA, these people were eager to do something to contribute to India’s freedom movement which escalated the revolt,” Kapoor said.

“The RIN revolt was a great reminder to the British that once the ideas of sedition, rebellion, revolt and nationalism reach the services like army, navy, police or bureaucracy, there will be no way left for the Britishers to stay in India,” said Misra.

He also said that there was great deal of Communist support to the revolt.

“They mobilised the people and that mobilisation definitely played a key role. The time was marked by the end of World War 2, victory of the allied forces, and victory of the USSR. These all set the narrative that the forces of fascism should be defeated by socialism,” Misra added.

Kendall Jenner Just Changed Up Her Style and I’m Very…

Invincible: How a woman amputee created history at the top…

Cong plans press blitz ahead of rally and Yatra