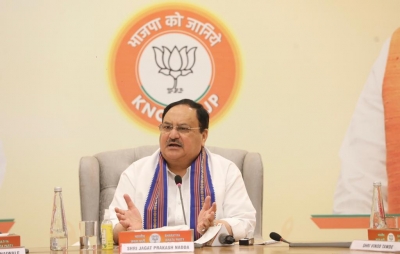 Chennai, Dec 28 (IANS) BJP president J.P. Nadda who commenced his election campaign for 2024 Lok Sabha elections from Coimbatore in Tamil Nadu on December 27 has said that he expects the BJP and NDA to do extremely well in the state and win a few seats.

A BJP leader said that Nadda’s presence in a public programme from Tamil Nadu was a clear message that the saffron party was serious in the southern state.

BJP Tamil Nadu state president, K. Annamalai had told mediapersons that the BJP national president was commencing his 2024 electoral campaign with the public programme at Karamadai in Coimbatore.

Sources in the Tamil Nadu BJP told IANS that Nadda has spoken to the party top brass in the state to win a few seats including the seats that the party had won early.

It may be noted that BJP had won in Coimbatore and Kanniyakumari Lok Sabha seats.

According to a senior leader of the BJP who was privy to the national president speaking to party office bearers, the party national leadership was keen that the BJP must win a few seats from the state and to make its ally AIADMK win a large number of seats from Tamil Nadu.

Nadda in his speech had lashed out at the DMK stating that it was a dynastic party just like the Congress and that the state was not safe in the hands of that party.

The BJP leader also stated that the government under Prime Minister Narendra Modi had supplied Covid-19 vaccines to around 100 countries in the world and of this 48 countries had received the vaccines free of cost.

The BJP president also said that the Central government had contained the spread of Covid -19 by providing two doses of vaccine to people of the country.

Nadda in his speech said that BJP was the only political party that believed in “sabka saath, sabka vikas, sabka vishwas, sabka prayas”.

It is to be noted that the BJP has been in an experimental phase In Tamil Nadu and has tried a newly inducted leader, K. Annamalai — who quit IPS and joined the saffron party, as the party state president. The party has ever since seen an ascendancy in its fortunes with good public participation in its programmes and conduct of programmes across the state.

The BJP has drawn a blank in the 2019 Lok Sabha elections even as the party has a strong presence in seats like Kanniyakumari and Coimbatore. The party has now 4 MLAs after the 2021 assembly elections and this has buoyed up the fortunes of the BJP in Tamil Nadu.

The fact that the BJP and the Prime Minister were focusing on Tamil Nadu is clear after the former state president of the party, L. Murugan was made a Union Minister of State in charge of Fisheries, Information and Broadcasting even though the party did not have any MPs from the state.

Raj Cong ministers, MLAs to walk 15 km on 28th of each month to reach out to public

UP: Licence of pvt hospital in Meerut suspended for…

UP Minister objects to Rahul Gandhi’s kiss for sister…