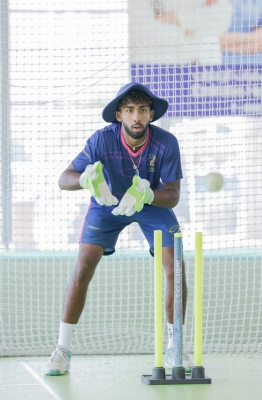 Dubai, Jan 7 (IANS) Playing alongside some of the big stars is a dream cherished by all young cricket players. The dream has come true for United Arab Emirates (UAE) cricketers Muhammad Waseem and Vriitya Aravind thanks to the ILT20 league to be played in the region in January-February this year.

Muhammad Waseem and Vriitya Aravind will be a part of the MI Emirates in the inaugural season of the DP World ILT20, which will be hosted across Dubai, Abu Dhabi and Sharjah with six teams battling for the trophy.

Opening batter Muhammad Waseem, who has scored 743 runs in 20 T20s, expressed that he can’t wait to play alongside Kieron Pollard in the MI Emirates camp.

“I am feeling very happy and I feel lucky to be a part of such a big franchise. I will try my best to prove myself during the tournament. This is a huge moment for us that I can’t put into words. I will try to play my best and showcase the talent that UAE has. I can’t wait to meet Kieron Pollard and play alongside him. I played with him in Abu Dhabi T10 as well,” he was quoted as saying by the franchise.

When asked about how he started playing cricket, the UAE player said, “I have been interested in cricket since my childhood days. I started playing the game seriously in 2014. I played for my school and then went on to play at the district level, which is where my passion grew for the game.”

Meanwhile, wicketkeeper-batter Vriitya Aravind, who has scored 536 runs and effected 12 catches & three stumpings in 25 T20s, said that he always wanted to play for the MI franchise, “It’s an honour and a privilege to represent one of the most successful cricket franchises in the world. I saw Sachin Tendulkar play for MI (in the IPL) and I wanted to represent the franchise at some point in my life therefore I feel lucky to have gotten a chance to be a part of the MI Emirates at an early age. I am looking forward to playing with Nicholas Pooran since we have similar roles as top-order batters and wicketkeepers. I think I will keep pestering him with questions.”

Aravind also spoke about the moment which inspired him to be a cricketer, “I was born in India and everyone wants to play cricket there. And I was in the country when India won the 2011 ICC Men’s World Cup. That is my first memory of watching an entire World Cup and I also celebrated on the streets when India won it. I made up my mind on that day that I want to be a cricketer and play in the World Cup.”

The MI Emirates will be in action when they take on Sharjah Warriors in their first match of the DP World ILT20 at the Sheikh Zayed Cricket Stadium, Abu Dhabi on 14 January 2023.

Making its debut on January 13 (2023), the inaugural DP World ILT20 promises to be a high-octane competition with some of the greatest cricketing superstars on the planet set to make their way to the UAE to kick off the league. The league will be played in a 34-match format across the UAE’s exemplary, world-class cricket facilities in Dubai, Abu Dhabi and Sharjah.

Vishnu Manchu trashes rumours claiming he had run down…

Tea Seller Who Left Studies Due To Poverty, Now Teaches At…