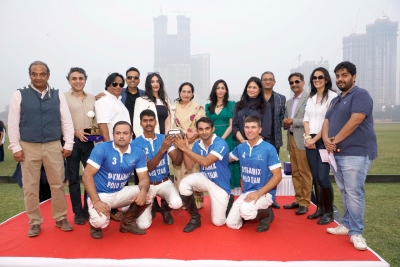 Dynamix Achievers were the first team to enter into the finals as they were the only team to win both their league games.On the other hand, Mayfair Polo were tied for second place with Madon Polo and Sternhagen Polo as they all lost one game and won their other game.

A penalty shoot took place on Friday to decide the other finalist and Mayfair Polo came out as victors from it.

As per organisers, both teams in the final consisted of four players and the rankings ranged from -2 to +10 as per their performances and skills.

In the finals, both Casper West and Nicolas Scortichini served as the umpires and Manuel Llorente was the referee for the game.

A penalty was again awarded but this time it was given to Mayfair Polo and Siddhant Sharma scored from it. The scoreline at the end of the chukker was Dynamix Achievers – Mayfair Polo (5-3).

In the third chukker, Chris Mackenzie scored again for Dynamix Achievers even though he had lost his balance on the horse. Siddhant Sharma scored after a brilliant assist from Daniel Otamendi to keep Mayfair Polo in the fight. Shamsheer Ali scored again, this time running from one end of the ground to the other. The scoreline at the end of the chukker was Dynamix Achievers – Mayfair Polo (7-4).

In the fourth chukker, Chris Mackenzie scored a goal from a penalty. Dynamix Achievers were awarded a penalty soon after and it was once again scored by Chris Mackenzie. Siddhant Sharma scored again for Mayfair Polo keeping hopes of a comeback alive.

Kendall Jenner and Devin Booker call it quits after two…

Wimbledon 2021: Ankita Raina-Lauren Davis bow out in the…

Nikhil D’Souza focussed on making music that can…