Commemorating 26/11, protests held in US against Pak-sponsored terrorism 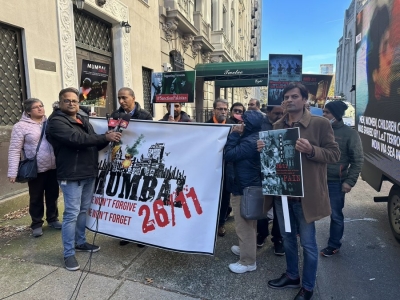 New York, Nov 27 (IANS) Commemorating the 26/11 Mumbai terror attacks of 2008, protests were held across the US against Pakistan-sponsored terrorism.

South Asians and others demonstrated outside Pakistani diplomatic missions in New York, Washington and Houston on the anniversary of the attacks on Saturday, denouncing the support and protection given by Pakistan to terrorists.

Digital media trucks with the message ‘Never Forget’ and displaying images of the 26/11 carnage in Mumbai as well as the perpetrators of the attack now in Pakistan made rounds of the five cities.

The protesters in New York and Washington asked the US to impose sanctions against Pakistan for its role in promoting terrorism and sheltering terrorists.

At least 166 people, including several Americans, were killed in the 2008 terror attacks in Mumbai carried out by the Pakistan-sponsored Lashkar-e-Taiba, whose leaders are still in that country, and with the help of an American, Davood Sayed Gilani who used the name David Headley, and a Canadian, Tahawwur Rana.

Headley and Rana have been tried and convicted in the US.

FIFA World Cup: Morocco’s knockout stage hopes get a shot in arm with a 2-0 upset of Belgium (Ld)

Global economy not out of the woods yet: IMF Chief…