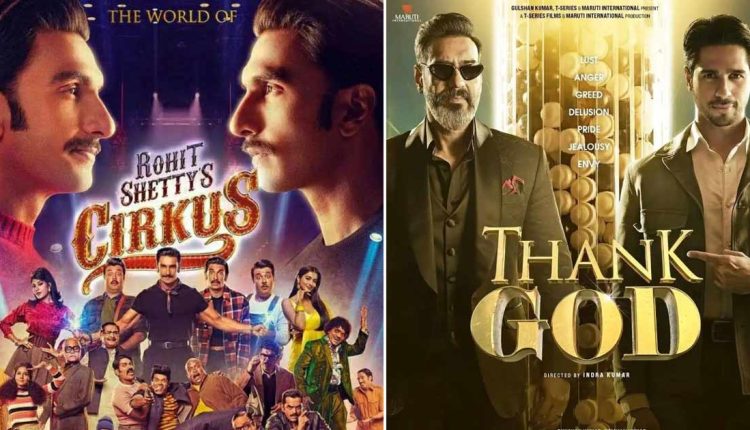 Cirkus Box Office Day 6 (Early Trends): Rohit Shetty directorial seems to be facing a tough time at the box office. Ever since the film was announced, moviegoers had huge expectations from the Rohit Shetty directorial, especially after the box office success of his last directorial Sooryavanshi starring Akshay Kumar in the lead role. However, in the shocking turn of events, the film seems to have turned out to be disastrous for the makers.

Right from the first day of its release, the film has been striving hard to maintain pace at the ticket window. The film also stars Pooja Hegde, Jacqueline Fernandez, Johnny Lever, Varun Sharma, Mukesh Tiwari, Radhika Bangia and others in pivotal roles.

As per the early trends flowing in, the film dropped further the next day. According to the latest media, Cirkus has collected around 1.80-2.10 crore*. With its latest numbers, the film’s total collection now stands at this 25.40-25.70 crore*. The film earned 23.60 in the first 5 days of its release at the domestic box office.

KGF Chapter 2 Sold 21.4 Lakh Online Tickets In A Single Day, Leaves Baahubali 2: The Conclusion Behind On BookMyShow In All-Time Record!

With its Day 6 numbers, Cirkus has earned lower than what Ajay Devgn and Sidharth Malhotra earned in the first week of its release as it earned 30.75 crore in 7 days. And even with tomorrow’s earnings, the film is unlikely to reach 30 crore.

Meanwhile Bollywood has gone through a tough time in 2022. While we witnessed a few films like The Kashmir Files, Bhool Bhulaiyaa 2, Brahmastra and others taking the tickets windows by storm while others like Shamshera, Samrat Prithviraj, Bachchhan Paandey, Laal Singh Chaddha and Raksha Bandhan among others tanked at the box office.

Must Read: Box Office Roundup 2022: With Brahmastra Topping The Charts In Both Lists, Take A Look At Top Openers & Highest Week 1 Grossers Of Bollywood!

From Tunisha Sharma, Sidhu Moose Wala, To Raju Srivastava – Celebs Who Left Us Teary-Eyed With Their Sudden Demise In 2022

Former ‘Superman’ Henry Cavill Beats Chis Hemsworth, BTS’ V & Many Others To Grab The Top Spot In The Most Handsome Man Of 2022 List- Check It Out Here!

Janhvi Kapoor On Getting Trolled For Whatever She Does, Reveals People Tag Her ‘Nepotism Ki Bachchi’