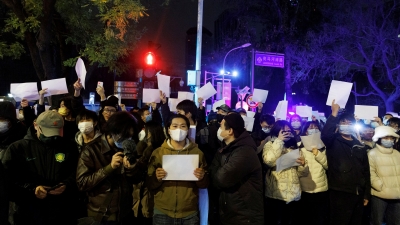 London, Nov 29 (IANS) China’s censors have been overwhelmed as they try to wipe images of blank sheets of white paper used by protesters in a growing number of demonstrations against President Xi Jinping’s zero-Covid policy from the internet, the media reported.

The country is currently facing its largest anti-government protests since the Tiananmen Square massacre, with protesters in at least seven cities holding up blank sheets of paper to symbolise censorship, the Daily Mail reported.

Protesters have taken to the streets of Beijing, Shanghai, Wuhan and Nanjing in an unprecedented wave of dissent to demonstrate against President Xi, his oppressive Covid crackdowns and increasingly authoritarian rule, Daily Mail reported.

Online discussions and news coverage of the demonstrations have now been banned, with security forces deployed to the streets of the country’s major cities last night.

All signs of the blank sheets of paper have also been erased, including pictures and videos of packs of white paper, The Telegraph reports.

But social media users on the platforms Weibo and WeChat have taken matter into their own hands by posting their own images of the blank sheets.

It includes some using filters while taking videos of videos to evade the government’s artificial intelligence.

Meanwhile, Xi has yet to even acknowledge the marches but few expect him to back down.

It comes after an apartment fire in the city of Urumqi killed at least 10 and sparked the protests amid claims that China’s strict lockdown measures hampered rescue efforts and the ability of residents to escape.

Beijing denies this was the case, and has blamed ‘forces with ulterior motives’ for linking the two, Daily Mail reported.

Yo Yo Honey Singh Finally Breaks Silence On Collaborating…

You can’t wish away pressure; time to become more resilient

A Cinderella run to remember: Reactions to Barbora…