China ‘warned away’ US warship 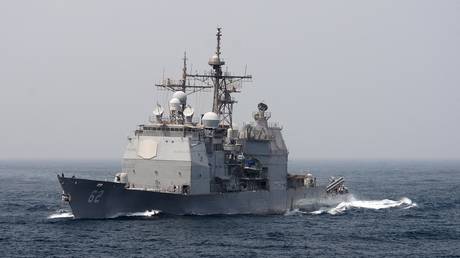 USS Chancellorsville was “trespassing” in its waters in the South China Sea, Beijing claims

China’s military has said that its forces have “followed and warned away” the American guided-missile cruiser USS Chancellorsville after it approached the Nansha [also called the Spratly] Islands in the South China Sea early on Tuesday.

The arrival without prior Chinese authorization of the US warship near the islands, which Beijing considers to be part of its territory, was a “serious violation of China’s sovereignty and security,” the country’s military spokesman Tian Junli declared.

The move was further proof that Washington is working towards “militarization of the South China Sea,” Tian said, adding that the US was a “provocateur against peace” in the region.

The spokesman reiterated the Chinese military’s commitment to protecting the country’s sovereignty and to upholding stability in the South China Sea.

The US Navy’s 7th Fleet has rejected the Chinese accusations as “false,” insisting that USS Chancellorsville had been carrying out a freedom-of-navigation operation (FONOP) in the area, in line with international law.

“The US challenges excessive maritime claims around the world regardless of the identity of the claimant,” it said.

Nansha, known also as the Spratlys, is a vast archipelago, parts of which are claimed by China, Vietnam, Taiwan, Malaysia, Brunei, and the Philippines.

Beijing, Taipei and Hanoi insist foreign military vessels must receive permission or submit an advance notification before sailing through the area.

Washington believes that these demands are “unlawful” and pose “a serious threat to the freedom of the seas, including the freedoms of navigation and overflight [and] free trade” in the South China Sea, through which multiple trade routes traverse.

The American destroyer USS Benfold had also sailed near the Nansha Islands in July, with Beijing vigorously protesting the move.

China’s military has said that it “warned away” a US warship that had approached the Nansha islands (or Spratlys) in the South China Sea Read Full Article at RT.com

SC allows ArcelorMittal, NuMetal to bid for Essar Steel once…

Podcast: Why Mumbai should stop treating the sea as a…

BJP hints at reconciliation with Sena