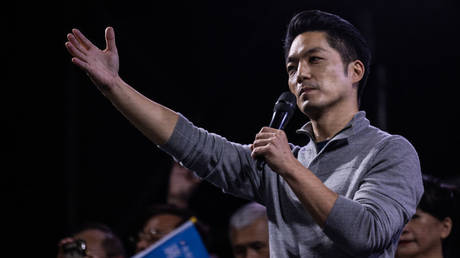 The great-grandson of Taiwan’s former authoritarian leader Chiang Kai-shek has emerged as a rising star in the country’s nationalist Kuomintang (KMT) party, winning election as mayor of Taipei.

Chiang Wan-an, who at 43 became the youngest mayor in the capital city’s history, declared victory on Saturday night after his two rivals in a three-way race conceded defeat. The US-educated corporate lawyer, who returned to Taiwan in 2013 to pursue politics, won 42.3% of the votes. His nearest opponent, Chen Shih-chung of Taiwan’s ruling Democratic Progressive Party (DPP), took 31.9%.

The mayorship of Taipei has been a springboard to Taiwan’s presidency in recent decades. In fact, each of the past four Taiwanese presidents, including current leader Tsai Ing-wen, was mayor of the country’s capital city before taking the national reins.

Chiang also has family history on his side. He is the great-grandson of the man who ruled Taiwan for more than 25 years after fleeing to the island in 1949 following the defeat of the nationalists by communist forces in the Chinese Civil War. The mayor-elect’s grandfather, Chiang Ching-kuo, continued the family political dynasty as president from 1978 to 1988. Chiang Kai-shek and Chiang Ching-kuo both ruled until dying in office.

Chiang Wan-an’s victory marked one of several key setbacks for Tsai’s ruling party in Saturday’s local elections of mayors and county chiefs. The DPP won only five seats, the worst result since its founding in 1986, while the KMT took 13. Tsai, whose current term as president runs through 2024, stepped down as party leader.

One key issue on the minds of voters was rising tensions with China, which has ramped up military drills in the Taiwan Strait and vowed to reunify with the self-governing island. Tsai had framed the contest as a referendum on “Taiwan’s persistence and resolve to defend freedom and democracy.” Beijing praised the outcome, saying the elections showed that Taiwan’s people support peace, stability and “a good life.”

Tsai and the DPP have accelerated efforts to remove symbols of Taiwan’s authoritarian past, such as pulling down Chiang Kai-shek statues. However, family connections to deceased dictators have been a winning formula in Asian politics. Park Geun-hye, the daughter of South Korea’s Park Chung-hee, was elected president in 2012. Current Philippines President Ferdinand Marcos Jr. is the son and namesake of former leader Ferdinand Marcos.

Chiang Wan-an of the nationalist Kuomintang party has been elected as the youngest mayor in the Taiwanese capital’s history Read Full Article at RT.com

Five years after BJP’s UP sweep: In Basti, Dalits upset over…

LFW: Kangana Ranaut to be showstopper for Anushree Reddy

Ukraine and Russia: What you need to know right now

6 reasons why you should include green tea in your daily…