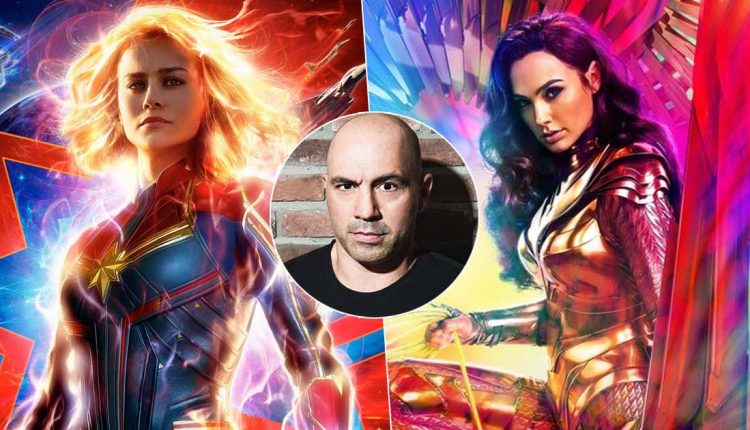 Captain Marvel vs Wonder Woman! The Former Didn’t Work Because She Didn’t Have A Boyfriend?(Photo Credit –Instagram/Poster From Movie)

Comedian and actor Joe Rogan is popular for his unfiltered opinions on anything and everything he shares on his podcast Joe Rogan Experience on his YouTube channel. The comics often invite different celebs on his podcast. The channel has around 6.89 million subscribers to be précised. While he doesn’t shy away from calling a spade a spade, he once shared an interesting theory behind why Captain Marvel miserably failed.

In his podcast, the comic compared the MCU film with Gal Gadot’s Wonder Woman, Thor, and Hulk. He was accompanied by Alonzo Bodden. Scroll down to read the details.

On his podcast, which he dropped on May 20, 2020, Joe Rogan claimed that Captain Marvel failed because she didn’t have a boyfriend while Wonder Woman did despite having all the superpowers. In the clip, he’s heard saying, “That’s the problem. If [Thor] is a god, then what the f**k is Captain Marvel because that sh*t trumps everything. She comes down and everybody’s gotta sit the f**k down. Mom’s here. She’s the superhero mom! Captain Marvel’s the number 1 superhero. You wanna save the world, you call her. They almost gave her too many powers.”

Brad Pitt Reveals His Favourite S*x Scene & It’s Not With Angelina Jolie But With Ex-GF Shalane Mccall: “Was Just Rolling And Frolicking”
‘Wolverine’ Hugh Jackman Finally Breaks Silence On Speculations Of Using Steroids To Get That Jacked Up Physique: “I Just Do It The Old School Way”

Adding to this Alonzo said, “They gave her everything except a good movie. And they can’t figure out how to make a good movie with that? Remember Wonder Woman had a boyfriend. People liked it better,” added Joe Rogan further. Watch the video below:

During the Coronavirus outbreak, Joe Rogan criticised Gal Gadot and other celebrities for separately singing John Lennon’s ‘Imagine’ for a video compilation asking people to stay strong. Joe Rogan had called it a dumb move on his podcast, “This is not the time, when everyone’s granny is dying, you f*cking idiot, to sing, ‘Imagine there’s no heaven.’ It’s such a dumb move.”

Well, this was Joe Rogan’s take/theory on Marvel Captain and Wonder Woman, what is yours?

For more such interesting throwback pieces, stay tuned to Koimoi!

Must Read: Lovesutra Episode 13: Cameron Diaz Once Opened Up About Primal, Animalistic S*x But As A Man, Here’s What I Think About Acknowledging Having Rough S*x!

The post Captain Marvel vs Wonder Woman! The Former Didn’t Work Because She Didn’t Have A Boyfriend? Joe Rogan Once Said “Marvel Can’t Figure Out How To Make…” appeared first on Koimoi.

It’s obviously tough times when you’re in the…