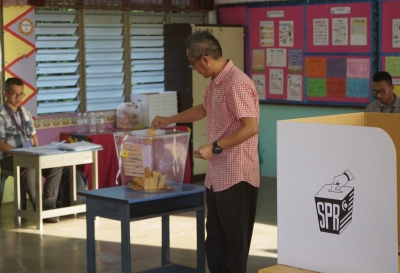 Kuala Lumpur, Nov 5 (IANS) Nominations for candidates seeking to contest the 222 seats making up the lower house of the Malaysian Parliament as part of the country’s general election proceeded smoothly on Saturday.

Candidates are vying for those seats including the former ruling coalition Barisan Nasional, the main opposition coalition Pakatan Harapan and several other political parties and independent candidates, with local media putting the total contesting at over 1,000, reports Xinhua news agency.

The number of candidates running for the seats makes this election a highly contested one, with an influx of new parties and independents leading to numerous multi-cornered fights.

This election will also see a record number of eligible voters due to the lowering of the voting age from 21 to 18 years old and automatic voter registration, which will see all citizens over 18 years old being added to the voter register.

Among key issues for voters are economy and inflation, political stability, corruption and inter-ethnic tensions in the multi-ethnic country.

The polling day has been set for November 19.

Prime Minister Ismail Sabri Yaakob dissolved Parliament on October 10, paving the way for a snap election, citing the need to end the political uncertainty which has seen two premiers since 2020.

Anupam Kher to star in his 501st film

Bappi Lahiri to make a cameo in TV show

22 killed in Andhra as vehicle falls into river