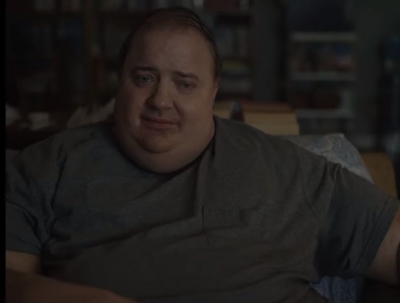 Los Angeles, Nov 8 (IANS) The Brendon Fraser-starrer “The Whale”, which emerged from the fall festival circuit with rave reviews for Fraser’s performance, unveiled its trailer on Tuesday, reports ‘Variety’.

The film has been directed by “Black Swan” director Darren Aronofsky, who is joined by his longtime cinematographer Matthew Libatique. Libatique has shot every Aronofsky movie to date, except for “The Wrestler”.

The trailer, which is over a minute in length, has sombre yet soft colour tones and shows Fraser in a bulked up form much like its title. It goes onto throw dialogues from the film until Fraser yet again makes an appearance with a nasogastric tube running across his face.

“It felt so affirming,” Fraser told ‘Variety’ in October regarding the enthusiasm surrounding his appearances all through the fall festivals.

“I was emotional because it was acknowledgment that what we did is making an impact. And that kind of response feels completely new in my professional life,” Fraser said.

The film follows Charlie (played by Fraser), an English teacher living with obesity who has decided to eat himself to death. His pain and misery stems from the abandonment and death of his gay lover, leading to chronic binge-eating.

Charlie struggles also to reconnect with his 17-year-old daughter, played by “Stranger Things” favourite Sadie Sink. Now, the 600-pound man has one last shot at redemption with his child.

Joining Fraser and Sink in the film are Hong Chau, Samantha Morton and Ty Simpkins. The screenplay is adapted from playwright Samuel D. Hunter’s play of the same name.

Tokyo 2020 and gender equality: Are the Olympic Games really…