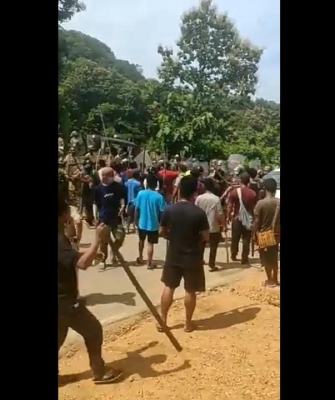 Shillong, Nov 28 (IANS) After a week-long tension following November 22 Assam-Meghalaya border violence and shooting that also killed five Meghalaya citizens and an Assam forest guard, the situations returning to normalcy in Shillong and other districts facilitating the Meghalaya government to lift suspension of mobile internet services on Monday.

Meghalaya Chief Secretary Donald P. Wahlang said on Monday that the state government has decided to lift the temporary suspension of mobile internet and data services that was imposed in seven districts of the state on November 22 to maintain the proper law and order situations.

“The government has taken the decision in view of the improvement of the overall law and order situation in Shillong and other districts. Some of the mobile service providers have already resumed the services,” the Chief Secretary told the media.

The measures were taken after the border violence and subsequent protests in Shillong and the other districts over the death of six persons in police firing at Mukroh village in Meghalaya’s West Jaintia Hills district last week.

Police said that there has been no untoward incident in Shillong and its outskirts for the past 48 hours and the people including the traders and transporters started their normal business while the offices and educational institutions functioned almost normally. Also, local organisations have not announced any fresh agitation over the border violence.

The Meghalaya government has decided to set up police outposts in all “sensitive and possible trouble torn areas” along the inter-state border with Assam.

Deputy Chief Minister Prestone Tynsong said that the police outposts would be set up in those mixed populated areas where skirmishes have been reported occasionally.

Further, reacting to Assam Chief Minister Himanta Biswa Sarma’s assertion that Mukroh falls under the state’s West Karbi Anglong district, Tynsong said that it has been an integral part of Meghalaya, and the village is not considered on the list of disputed territory.

Noting that the unresolved border dispute was the primary reason behind the Mukroh shooting incident, Tynsong said that he is confident that the second phase of the border talks between Meghalaya and Assam should begin at the earliest.

Two Indian Students Die by Drowning in Lake in Missouri

Assertive Kohli needs influential coach to back him

When Rihanna Took Our Breath Away Dipping In A Golden Mini…

Expect easing up in Delhi’s Covid-19 spike next week:…

Good fiscal performance by states should be incentivised:…