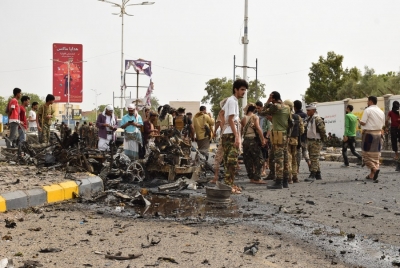 Aden (Yemen), Nov 27 (IANS) At least five members of Yemen’s government forces were killed in a bomb explosion in the country’s southern oil-rich province of Shabwa, a security official said.

“Suspected al-Qaida gunmen targeted vehicles of the government forces with an Improvised Explosive Device in the western part of Shabwa, causing a huge blast in the area located near oil fields,” the local security official said on condition of anonymity on Saturday.

He confirmed that a total of five soldiers, including a senior officer, were killed and a number of others injured in the terror attack, Xinhua news agency reported.

The bomb blast destroyed a military vehicle of the newly-recruited Shabwa’s Defence Troops which are largely backed by the Saudi Arabia-led coalition, the source said.

The Aden-based Southern Transitional Council said in a brief press statement that their forces defused another explosive device in Shabwa.

Attacks carried out by militant groups against the pro-government southern troops surged in various regions of Yemen just two months after the expiration of a UN-brokered truce on October 2.

The terror attacks occur as the Yemeni government forces backed by the Saudi Arabia-led coalition are sporadically striking the hideouts of the Yemen-based al-Qaida branch mainly in the mountainous areas of Shabwa and neighbouring provinces.

The Yemen-based al-Qaida in the Arabian Peninsula (AQAP) network has been responsible for many high-profile attacks against the security forces in the country’s southern provinces.

The AQAP has exploited years of deadly conflict between the Yemeni government and Houthi rebels to expand its presence in the war-ravaged Arab country.

Tokayev sworn in as Kazakh President

US democracy is failing – poll