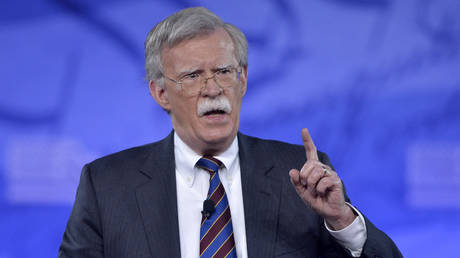 Former US National Security Advisor John Bolton has denounced Thursday’s high-level prisoner swap with Russia, saying it was a sign of weakness that emboldens “terrorists and rogue states.”

“The Bout-for-Griner prisoner swap is not a trade, it’s an American surrender. This is not what American strength looks like. Terrorists and rogue states are smiling,” Bolton said on Twitter.

Russian national Viktor Bout, sentenced in the US to 25 years on arms smuggling charges, was exchanged for basketball star Brittney Griner, who was sentenced in August to nine years in a Russian penal colony for drug trafficking. The trade took place in the United Arab Emirates.

The US and Russia pardoned both of them before the swap, which was mediated by the UAE and Saudi Arabia, according to the joint statement released by the two Gulf states on Thursday.

Russia and US swap prisoners Viktor Bout and Brittney Griner

While Bolton did not elaborate on why he considered the swap a “surrender,” most of the criticism directed at President Joe Biden has involved the fact that he picked WNBA’s Griner over Paul Whelan, a retired US Marine convicted of espionage in 2020 and sentenced to 16 years.

The US considers charges against Whelan “totally illegitimate,” White House press secretary Karine Jean-Pierre told reporters on Thursday afternoon, but said the choice ended up being “to either bring Brittney home or no one.” Biden will “never stop working” to secure Whelan’s release, she added.

Asked about the Saudi and UAE role in the swap, Jean-Pierre said “there was no mediation involved” and that only Russia and the US were at the table.

“On a personal note, Brittney is more than an athlete, more than an Olympian, she is an important role model, an inspiration to millions of Americans, particularly the LGBTQI+ Americans and women of color,” added Jean-Pierre, who herself made headlines as the first black lesbian to speak for the White House.

Bolton is a long-time foreign policy hawk, who was President Donald Trump’s national security adviser between April 2018 and September 2019. After he was fired, presumably for ruining the nuclear talks with North Korea, he became an outspoken critic of Trump. Though he has never held elected office, Bolton said last week he’d be willing to run for the Republican nomination in 2024 if other GOP hopefuls don’t “repudiate” the 45th president.

Buddhist nuns are gaining new leadership roles in a…

7 Soothing eye creams for men on Amazon under $50