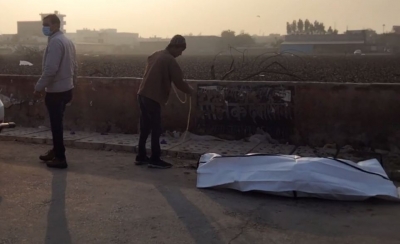 New Delhi, Jan 14 (IANS) The Delhi Police’s Special Cell has recovered a body chopped into three pieces from the Bhalswa Dairy area based on the disclosures made by two men, who were arrested for their suspected links with terror organisations, sources said on Saturday.

Jagjit Singh (29) alias Jagga alias Yaqub, a resident of Uttarakhand, and Naushad (56), a resident of Jahangirpuri, were arrested by the police on Thursday for their alleged links with anti-national elements.

On Friday, the Special Cell had recovered two hand grenades from their rented accommodation in the Bhalswa Dairy area.

“The disclosures made by the accused led the police to their rented accommodation at Shradha Nand Colony under the Bhalswa Dairy police station area. Two hand grenades were recovered from their room,” said a senior police officer.

“Traces of human blood were also found by the forensic team,” the officer said.

The police said they have also recovered three pistols along with 22 bullets. The duo was been sent to 14-day police custody on Friday.

According to the police, Naushad is associated with Pakistan-based terrorist outfit Harkat-ul-Ansar, operating primarily in Kashmir. He has been a life convict in two cases of murder and was also sentenced to 10 years in prison in a case under the Explosives Act. Jagjit Singh is a member of the notorious Bambiha gang, the police said.

“Jagjit has been getting instructions from anti-national elements based abroad. He is a parole jumper in a case of murder in Uttarakhand,” the officer said.

NATO urges Russia to respect nuclear pact with US

US remains committed to using full range of capabilities to defend S.Korea: Blinken

Pentagon allows Ukraine to fire long-range missiles at will

‘State of you lot’: Man City mocked for bizarre picture…