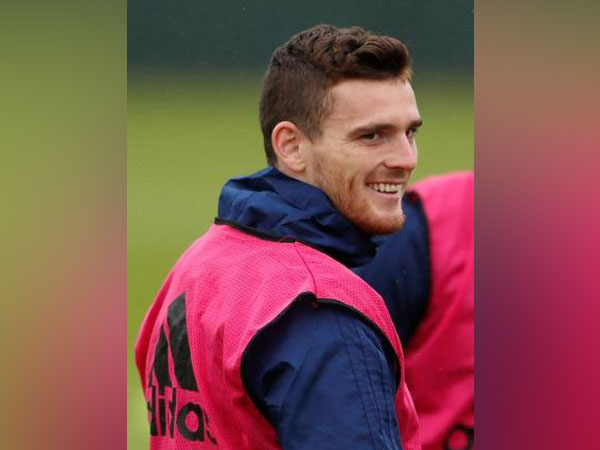 Liverpool [UK], May 28 (ANI): Liverpool’s Andy Robertson has said that winning games without fans won’t feel the same despite admitting that the players will have to adjust to this amid the coronavirus pandemic.
“The light at the end of the tunnel was just getting back into training, to be honest. At times, there were some days you didn’t think that would have been possible, but now we’re back here, we can look forward and look to the next step. Then, like I said, hopefully with the games we’ve got ahead of us, we can get back to it,” the club’s official website quoted Robertson as saying.
“Would we like to play in front of 55,000 people at Anfield? Of course, we would. Winning games or whatever without the fans won’t feel the same, but it’s something we know we need to go through and it’s something we know that in their houses and stuff they will be supporting us like mad and we’ll feel that support,” he added.
Before the Premier League’s 2019-2020 season was suspended in March, Liverpool were sitting at the top of the points table and were only two wins away from claiming the title. Currently, Liverpool have 82 points with a whooping 25-point lead at the top.
Liverpool have been conducting training sessions in small groups at staggered times since last Wednesday, observing the necessary social distancing guidelines. Also, due to the concerns regarding the spread of coronavirus, the competition is most likely to be played behind closed doors when it returns.
Robertson said the club is focusing on the preparation so that they are ready to win games when the season resumes.
“Hopefully we can celebrate a title if we get the job done – and there will be time to celebrate it when the time is right. But for now we need to keep focused, we know whatever games are coming up and whenever they start, we need to get them won and get that trophy for this club,” he said. (ANI)

Decision of postponing National Games taken without any discussion with us: IOA…

NHRC issues notice to Bihar, Gujarat govt, Railways over death of migrants due to…

Over 10,000 vacancies in various govt departments to be…

US, UK, Canada, Australia hit out at China over security law…