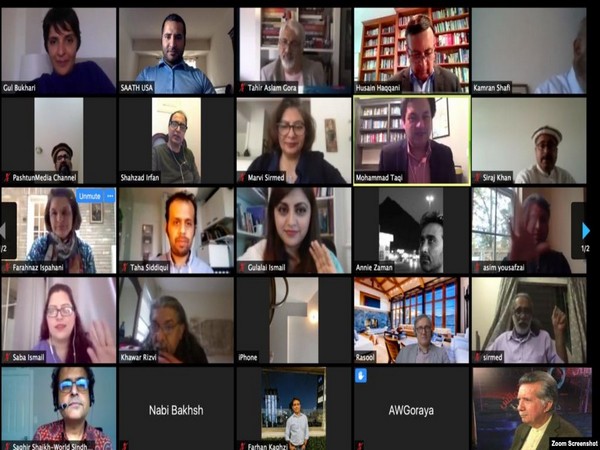 Washington D.C. [US], May 19 (ANI): Expressing concerns over enforced disappearances, state-sanctioned killings in Pakistan, prominent Pakistani dissidents, human rights defenders, and peace activists from around the world have asserted that repression by authorities in the country has increased amid the COVID-19 crisis.
In the wake of COVID-19 pandemic, South Asians Against Terrorism and for Human Rights (SAATH), a grouping of pro-democracy Pakistanis co-hosted annually by author and former Pakistan Ambassador to the US, Husain Haqqani, and US-based columnist Dr Mohammad Taqi connected virtually.
Several participants including social and liberal democrats, Baloch, Sindhi, Pashtun, and Seraiki nationalists, and women’s rights activists noted with concern that the situation in Pakistan has escalated several notches from being a hybrid democracy to a hybrid martial law.
The virtual conference was attended by participants from Pakistan, including members of parliament, and exiled dissidents living in the US, the UK, France, Netherlands, and Canada. SAATH Forum has an established tradition of holding widely attended annual conferences since 2016. Earlier this year, the fourth SAATH conference was held in Washington.
Twitter and other social media websites outages in Pakistan during the SAATH virtual conference raised suspicion that Pakistani authorities had disrupted social media access in Pakistan to block the public from following the conference’s deliberations.
Addressing the gathering, Husain Haqqani warned that “the post-COVID-19 environment will only aggravate Pakistan’s crisis.” He said, “Instead of persisting with old, failed policies, a new approach must be adopted. It should be based on tolerance, democracy, genuine federalism.”
Haqqani added that Pakistan has a better chance of moving forward as a democracy and a federation, setting aside militancy and militarism, and seeking peace with its neighbours.
“Unfortunately, anti-democracy elements paint democrats and pro-federation voices as anti-Pakistan,” he observed.
SAATH coordinator Dr Mohammad Taqi explained that “We are raising our voice since the situation in Pakistan is quite bleak. There is a lot of intellectual suffocation.”
Pashtun Tahaffuz Movement (PTM) member of parliament, Mohsin Dawar, lamented that “Pakistan’s political parties are compromised. The military is everywhere. They are micromanaging Pakistan. There is a vacuum for a real democratic force in the country.”
Senator Afrasiab Khattak raised the issue of clandestine efforts by the security establishment to roll back the provincial autonomy provided by the 18th constitutional amendment.
“We must resist the onslaught against democracy and especially the 18th Amendment. Since 2014, there has been a creeping coup and going after the amendment is part of that agenda,” Khattak said.
The SAATH virtual conference was attended by prominent Pakistani human rights defenders, public intellectuals, journalists, scholars living in Pakistan as well as those living in exile in different countries.
The prominent participants included politicians Senator Afrasiab Khattak, Farahnaz Ispahani, Mohsin Dawar, activists Gul Bukhari, Gulalai Ismail, Saba Ismail, Waqas Goraya, Annie Zaman, journalists Taha Siddiqui, Marvi Sirmed, and intellectuals like Kamran Shafi, Dr Saghir Shaikh, and Rasool Mohammad. (ANI)