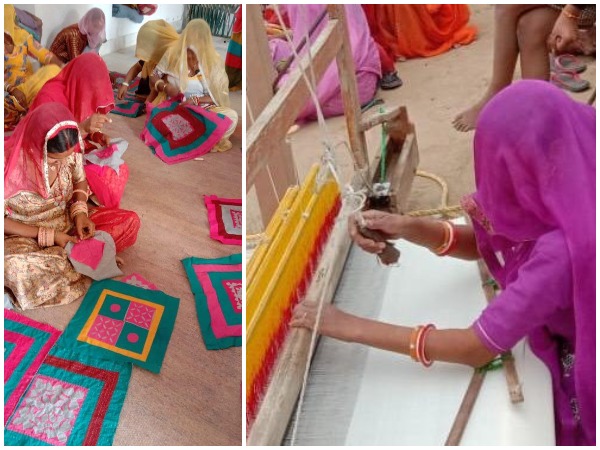 Pokhran (Rajasthan) [India], April 25 (ANI): Women of Pokhran Tehsil of Jaisalmer, a border district of western Rajasthan, have set a classic example of becoming financially independent by excelling the field of handicraft.
The place that became the pride of Indians after conducting the nuclear tests, Pokharan is now increasingly making its mark on the world stage in the aspect of women’s empowerment.
Situated 175 km from the tourist destination Jodhpur and 110 km from Jaisalmer city, the economy of the region is getting better as women of the place have made the local handicraft an important source of income.
This is not only strengthening the economy but also giving a new identity to the region.
Not just the support by HDFC Bank, a strong effort also goes behind by the NGO Urmul Trust in imparting the skills needed for training to the rural women.
In November, December of 2019 and January this year, a total of 106 women from Chacha, Thaat, and Gomat villages were groomed for self-employment by giving them handicraft development training.
During the 21-day long training, women were taught to spin the spinning wheel (charkha), filling the ‘gatta’ (part of Charkha on which thread is rolled), stretching, and weaving the clothes by running the handloom and khadi loom.
Similarly, 18 women in Thaat village, 30 in Chacha village, and 30 women in Gomat village were trained in cutwork embroidery.
One of the most praise-worthy points is that the women who cover faces with the ‘ghunghat’ (veil), also came forward to promote this art by getting their traditional handicraft weaving and cutwork training.
On the other hand, the rural women who till now were hesitant to do their traditional handicraft have now started learning and are self-employed at home.
As a result, it is these skilled women, who are extending their share of support to the family and earning their livelihood.
Udaya Devi of Thaat village, who was trained to make handicrafts a source of income, says that she had never done weaving before. She said that under the Marugandha project, Urmul has given us 21 days of weaving training and arranged permanent employment for them.
Anu Devi of Gomat village says that after getting training from Urmul, the women of the village are not only becoming financially strong but also walking shoulder to shoulder with men in running the family.
She also added that this employment has not only empowered her but has also given a respectable place in society.
According to Arvind Ojha, Secretary, Urmul Trust, Bikaner, the main objective of the institution is to provide employment to women from rural areas at home and make them self-reliant.
The efforts of the institution have instilled courage in the women living in the veil, and their leaning is moving towards their traditional handicraft.
He also added that in the areas where there is a lack of employment, there is a need for such organisations to revive these traditional handicrafts and connect rural women with self-employment.
According to Ojha, Urmul Trust is committed to enabling and empowering the lives of backward and disadvantaged people in the Thar desert. The main objective is to augment the traditional arts and methods of employment in conformity with the modern market.
With the traditional weaving in Pokhran reaching the world market, now women are being made self-reliant with an enhanced income being generated.
(The views expressed in the article are that of Ganpat Garg from Charkha Development Communication Network). (ANI)

Coronavirus: Nepal extends ban on flights operations till May 15