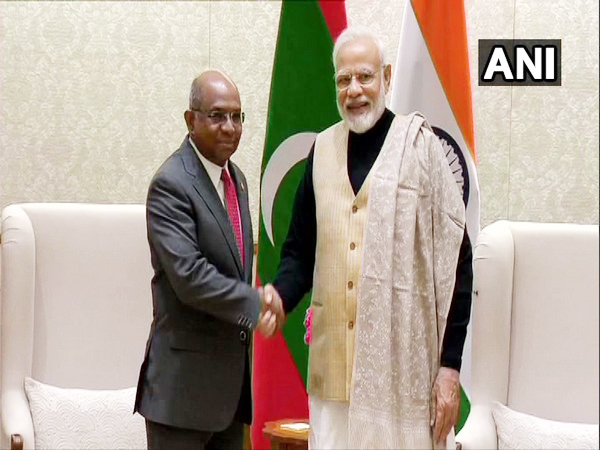 New Delhi [India], Dec 13 (ANI): Maldives’ Foreign Minister Abdulla Shahid called on Prime Minister Narendra Modi here on Friday and conveyed the “commitment of the leadership of the Maldives to its ‘India First’ policy” and to further strengthening the bilateral relations.
“Foreign Minister Shahid thanked PM Modi for his vision and strong leadership in driving the India-Maldives relationship. He expressed his deep appreciation for India’s support in various development cooperation initiatives that are currently being implemented in the Maldives. He conveyed the commitment of the leadership of Maldives to its ‘India First’ policy and to further strengthening the relationship with India,” a statement from the PMO said.
PM Modi conveyed his compliments to the Maldives’ Foreign Minister on the achievement of the government led by President Ibrahim Mohamed Solih in its first year.
“He noted with satisfaction the enhanced level of engagement between India and Maldives and the positive outcomes of bilateral cooperation during the last one year,” the statement said.
The Prime Minister expressed confidence that the discussions during the 6th JCM would “enable both sides to review progress and chart even a more ambitious way forward to further strengthen and deepen the mutually beneficial cooperation between the two countries” and also reiterated India’s commitment to partner the Maldives’ government for a strong, democratic, prosperous and peaceful Maldives.
“Delighted to meet you, Minister @abdulla_shahid. Glad that we had the opportunity to discuss various aspects of the strong friendship between our nations. Robust bilateral cooperation augurs well for the people of our nations,” PM Modi said in a tweet later in the day.
India and the Maldives signed three Memoranda of Understanding (MoU) and agreements during the sixth Joint Commission Meeting (JCM) held here on Friday, the Ministry of External Affairs (MEA) said.
An MoU was signed for cooperation between the election commissions of the two countries, while the other was exchanged for cooperation between their Financial Intelligence Units.
In addition, an Instrument of Ratification was exchanged “for the treaty on mutual legal assistance in criminal matters,” the MEA said in a release.
The joint commission meeting was chaired by External Affairs Minister S Jaishankar and his Maldivian counterpart Abdulla Shahid. (ANI)

Sharif may be considered for possible toxicology screen if platelet count does not respond: Pak media reports