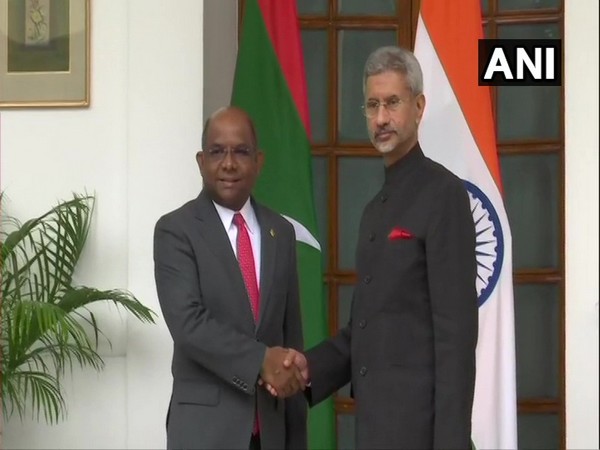 New Delhi [India], Dec 13 (ANI): India and the Maldives on Friday agreed to hold the meeting of Joint Working Group on Counter-Terrorism, Countering Violent Extremism and De-radicalisation at an early date to strengthen cooperation required to combat the common threats arising from terrorism and radicalism.
“Both the sides have agreed that Joint Working Group on Counter-Terrorism, Countering Violent Extremism and De-radicalisation will meet at an early date to strengthen cooperation required to combat the common threats arising from terrorism, radicalism and drug trafficking in the region,” said a joint statement issued on Friday after the 6th Joint Commission Meeting (JCM) between India and the Maldives.
External Affairs Minister S Jaishankar and Foreign Minister Abdulla Shahid co-chaired the 6th JCM between India and the Maldives, earlier today.
The joint statement stressed that both sides also reviewed with satisfaction the ongoing construction of police training facility in Addu city and capacity building in various fields including forensics for police personnel from the Maldives in India.
Highlighting that the discussions at the JCM were held in a friendly atmosphere, the statement noted that Prime Minister Narendra Modi and President Ibrahim Mohamed Solih have met on four occasions in the past year “illustrating the highest importance both India and the Maldives attach to the bilateral relationship.”
Both sides also noted that India’s ‘Neighbourhood First’ policy and Maldives’ ‘India First’ policy were “working in tandem to further strengthen a dynamic, multifaceted and mutually beneficial partnership that rests on the foundation of mutual trust, understanding and sensitivity to each other’s concerns.”
Further, it asserted that India-Maldives defence cooperation includes key infrastructure projects such as construction of the Composite Training Centre (CTC) for the MNDF, and Ministry of Defence Building, and the setting up of the Coastal Surveillance Radar System (CSRS), as well as training programmes for MNDF officials in India, joint exercises, medical camps, etc.
“The Maldivian side acknowledged the usefulness of CGS Kaamiyaab gifted by the Government of India for the enhancement of its maritime security,” read the statement.
Referring to the “strong increase in tourist arrivals from both sides in 2019 and the adoption of RuPay mechanism by the Maldives,” the statement said it bodes well for stronger people-to-people contacts between the two countries.
Both the sides noted with satisfaction the implementation of MoUs on Hydrography and White Shipping.
Stressing that JCM recognised the need to improve connectivity, strengthening people-to-people contacts, the joint statement said both sides agreed to work towards an early extension of the National Knowledge Network (NKN) to the Maldives to strengthen academic, research and commercial links between the two countries.
The two sides also agreed to expedite work on the construction of a state-of-the-art Cancer hospital in Hulhumale.
“The Maldivian side acknowledged the important role played by Indian nurses in its health sector and means to streamline the recruitment of nurses from India were discussed,” the statement said while adding that the Indian side assured of its continued support to meet the requirements for trained personnel at the Indira Gandhi Memorial Hospital (IGMH).
The two Ministers acknowledged the “exemplary service provided by the helicopters of the Indian Navy and the Indian Coast Guard in medical evacuations saving over 240 lives so far.”
Noting with appreciation the training programmes being conducted by BCCI for development of cricket in the Maldives, the JCM reviewed the progress in the development of the cricket stadium in Hulhumale.
“The restoration of Hukuru Miskiiy/Friday Mosque was identified as a priority and the JCM welcomed the fact that an Indian technical team is already in Male for its conservation. Discussions also centered on the organising of the Festival of India in the Maldives in 2020,” the statement said.
The JCM also welcomed the exchange of Instrument of Ratification of Treaty on Mutual Legal Assistance in Criminal Matters and signing of the MoUs between the Financial Intelligence Units of India and Maldives and between the Election Commission of India and the Elections Commission of Maldives.
The joint statement informed that it was decided that the next India-Maldives JCM will be held in the Maldives in 2021. (ANI)

Contrary to his wish, Zakir Naik was not allowed to come to Maldives, says Maldivian Parliament’s Speaker