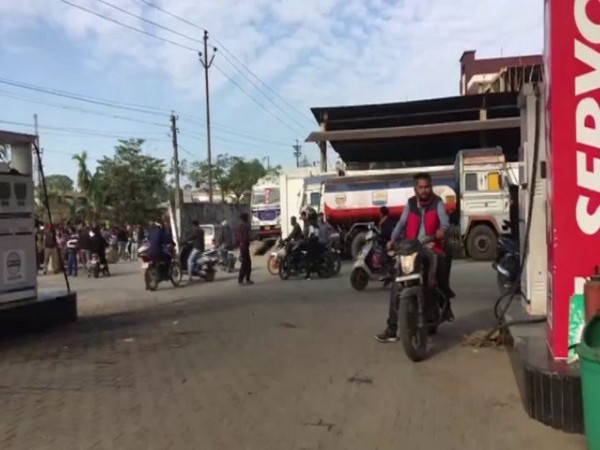 Guwahati (Assam) [India], Dec 14 (ANI): Following the relaxation in curfew which was imposed in Guwahati in the wake of protests over the Citizenship (Amendment) Act, a large number of citizens rushed to the ATMs to withdraw their money.
The curfew in Guwahati was relaxed from 9 AM to 4 PM by the administration today.
Speaking to ANI, a citizen said: “I am a student and I live alone. It is very difficult to manage my days without cash and the internet. I have spent the last four days on boiled rice. Today, I got my money after waiting for an hour.”
Another resident of Guwahati also echoed similar sentiment and said: “I have come from Gujarat, and I have been spending the last few days without money. Today, I came here and withdrew my cash after waiting for hours.”
Another Assamese citizen stated that the protest has caused a lot of suffering to the common people, and demanded the government to do something.
Protests have broken out in Guwahati and other parts of Assam following the passage of Citizenship (Amendment) Bill 2019 in Parliament on Wednesday, and it becoming an Act thereupon after the Presidential assent.
As many as 26 Army columns were deployed in Assam to assist the Central Armed Police Forces (CAPF) to handle the situation.
Earlier, the administration had suspended mobile Internet services for 24 hours on Wednesday in 10 districts of the state — Lakhimpur, Tinsukia, Dhemaji, Dibrugarh, Charaideo, Sivasagar, Jorhat, Golaghat, Kamrup (metro) and Kamrup.
The Citizenship (Amendment) Act, 2019 seeks to grant Indian citizenship to refugees from Hindu, Christian, Sikh, Buddhist and Zoroastrian communities fleeing religious persecution from Pakistan, Afghanistan, and Bangladesh and who entered India on or before December 31, 2014. (ANI)