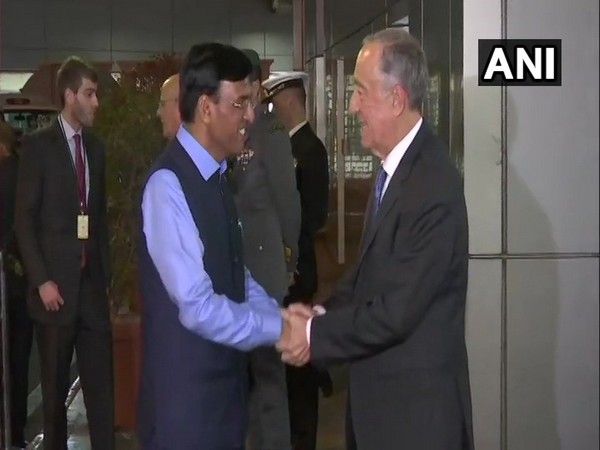 New Delhi [India], Feb 13 (ANI): Portuguese President Marcelo Rebelo de Sousa arrived here on Thursday on a four-day visit to India. Minister for Shipping Mansukh Mandaviya received him at the airport.
The Portuguese President is accompanied by Minister of State and Foreign Affairs Prof Augusto Santos Silva, Secretary of State for Internationalisation Prof Eurico Brilhante Dias and Secretary of State for National Defense Jorge Seguro Sanches.
This will be Marcelo’s first visit to India. The last visit by a President of Portugal to India was in 2007.
During the visit, Sousa will be accorded a ceremonial welcome at Rashtrapati Bhavan on February 14, followed by a visit to Rajghat.
The delegation-level talks will be held with Prime Minister Narendra Modi at Hyderabad House followed by a lunch, according to an official release.
President Ram Nath Kovind will meet the visiting dignitary on February 14 and host a banquet in the honour of him. Meanwhile, Vice President M Venkaiah Naidu will call on the visiting President on the same day, it added.
President Marcelo Rebelo de Sousa will also travel to the states of Maharashtra and Goa during his visit.
India’s relations with Portugal are marked by warmth and friendship and have assumed dynamism in recent years, the release said.
Recent high-level political exchanges include the visit of Prime Minister Antonio Costa to India in December 2019 and that of Prime Minister Modi to Portugal in June 2017.
The two countries have active and growing cooperation in the field of economy and business, science, culture, and education. They share considerable convergences on international issues.
The visit will provide an opportunity for the two sides to review progress in various sectors of bilateral relations and pursue new avenues of cooperation and exchange views on international issues of common interest, it added. (ANI)