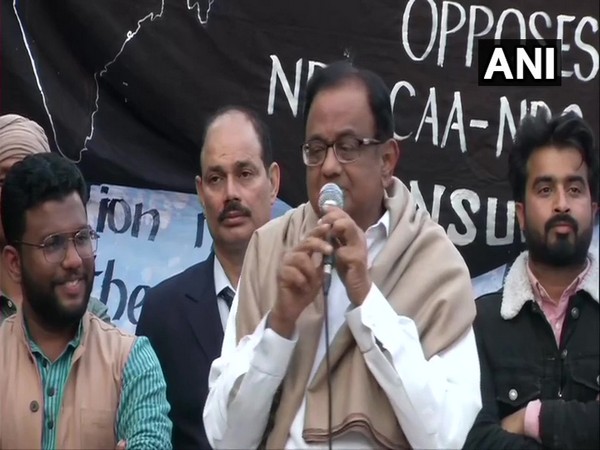 New Delhi [India], Feb 13 (ANI): Senior Congress leader and former Union Minister P Chidambaram on Thursday said that the National Population Register (NPR) will be defeated if the states refuse to implement it.
“NPR will be defeated if there is enough popular mobilization in every state and the states decide they will not implement it. NPR cannot be done without the participation of the states,” Chidambaram said while addressing students at Jawaharlal Nehru University (JNU) here.
The former Union Home Minister also took on the central government for the Citizenship Amendment Act (CAA) saying the law has hit at the foundation of India’s citizenship premises.
“They have cut the foundation of India’s citizenship premise by saying that citizenship will be given based on religion. You are changing the basis of citizenship from territory to religion,” said Chidambaram, a Supreme Court lawyer.
“You are now granting or denying citizenship based on religion. There are many countries which grant citizenship based on religion and I am not denying it…but that is not the basis over which India was formed,” he said.
The Citizenship Amendment Act, 2019, grants citizenship to Hindus, Sikhs, Jains, Parsis, Buddhists and Christians fleeing religious persecution from Pakistan, Afghanistan and Bangladesh, and who entered India on or before December 31, 2014. (ANI)