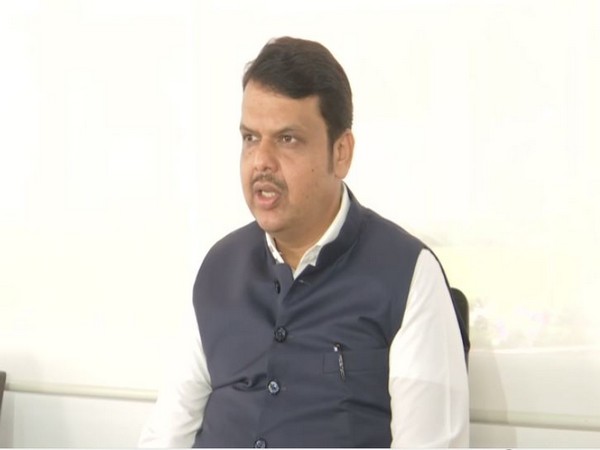 Mumbai (Maharashtra) [India], Feb 14 (ANI): Former Maharashtra chief minister Devendra Fadnavis slammed the Congress party for insulting Veer Savarkar and said that he will write to Maharashtra chief minister Uddhav Thackeray to seek ban against the published content.
Speaking at his official bungalow in Mumbai, Fadnavis said that Shivsena’s friend in Maharashtra- the Congress Party has been regularly insulting national heroes. He first began with the way Chhatrapati Shivaji Maharaj has been insulted in MP and also asked the Madhya Pradesh government to issue an apology and ensure that the statue is reinstated with full honours.
Fadnavis also accused the Congress of insulting Savarkar by printing wrong things about him in their mouthpiece Shidori.
“Shidori states that Savarkar was in jail in London on charges of rape. How can you call a great man like Veer Savarkar a rapist? This is a serious issue.. we cannot take such an insult. we will revolt against this,” Fadnavis said at a press conference on Thursday.
Continuing his attack, Fadnavis said, “Shidori has also criticised Shiv Sena’s stand, saying that Shiv Sena is supporting Savarkar without studying or knowing the truth about Savarkar. They should first study and then decide whether to support or not. Congress is continuously writing against Savarkar and Shivsena is not saying anything yet? Why is Uddhav Thackeray not responding?”
“We want Shivsena to clear their stand and Congress should take back their words against Savarkar. We want a ban against the published content. We will request the Maharashtra CM and I will myself write to CM regarding this,” he added.
Angry workers of the Shiv Sena and other organisations had blocked a section of the Chhindwara Nagpur Highway after a bust of Chhatrapati Shivaji was removed earlier this week.
Additional District Magistrate Chhindwara, Rajesh Shahi on Wednesday said: “Statue was placed at the site without permission. A probe is underway.”
According to information, Shiv Sena and other Hindutva organisations had given a memorandum to the municipality to install a statue of Shivaji at Sausar’s Mohgaon Tiraha in Chhindwara district. After the memorandum, the Municipal councillor visited Mohgaon Tiraha and designated a place for the statue’s installation. (ANI)