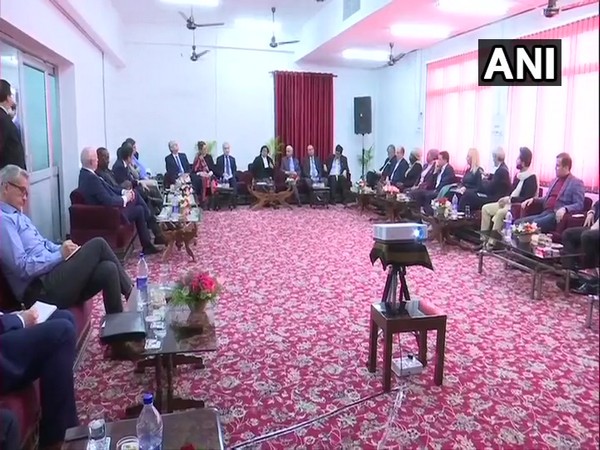 Jammu (Jammu and Kashmir) [India], Feb 13 (ANI): The second batch of 25 foreign envoys here on Thursday met Jammu and Kashmir Lieutenant Governor GC Murmu.
The foreign envoys, including those of Germany, France, and Mexico, are on a two-day visit of Jammu and Kashmir to witness the ground situation in the region nearly six months after the abrogation of Article 370 of the Constitution.
They also held meetings with Chief Justice of Jammu and Kashmir, Justice Gita Mittal.
The delegation reached Jammu from Srinagar where, early in the day, they were briefed by Chinar Corps Commander Lt General KJS Dhillon regarding the security situation in the region.
Yesterday, the foreign diplomats held extensive discussions with the prominent business community and political leaders in Srinagar.
The business community told envoys that they suffered losses due to abrogation of Article 370 followed by restrictions and at the same time they also said they are hopeful that promises of fast pace development by the centre would be fulfilled.
Envoys also met more than 100 members of civil society from across the section of Kashmir including engineers, doctors, lawyers, and students.
Civil society members told envoys that internet blockage continues to remain an obstacle in the restoration of full normalcy and they believe that full Internet should be restored.
The group comprises of representatives from Afghanistan, Austria, Bulgaria, Canada, Czech Republic, Denmark, Dominican Republic, the European Union, France, Germany, Republic of Guinea, Hungary, Italy, Kenya, Kyrgyzstan, Mexico, Namibia, The Netherlands, New Zealand, Poland, Rwanda, Slovakia, Tajikistan, Uganda and Uzbekistan.
Last month, envoys of 15 countries including US Ambassador to India Kenneth Juster and diplomats from Vietnam, South Korea, Brazil, Niger, Nigeria, Morocco, Guyana, Argentina, Philippines, Norway, Maldives, Fiji, Togo, Bangladesh, and Peru visited Jammu and Kashmir on January 9 and 10 to see first-hand efforts being made by the government in the region. (ANI)