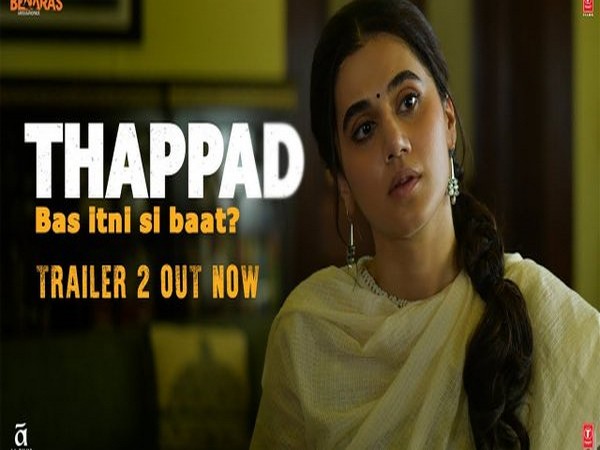 New Delhi [India], Feb 11 (ANI): Taapsee Pannu on Tuesday dropped an innovative second trailer of her upcoming flick ‘Thappad’ where she urged the viewers to report the video and get it banned from YouTube.
The 32-year-old actor shared the moment on Twitter along with the caption that reads: “Some things require a powerful action to bring about a change. Watch the Thappad trailer #2, out now!”
In the power-packed trailer, Taapsee is seen with her husband living in marital bliss. The trailer proceeds to a dinner party, where Taapsee’s husband feels insulted and takes his anger out by slapping her.
The video is then paused to Taapsee who looks into the camera and delivers a message. She asks viewers to report the trailer to YouTube stating such videos have no place online. She further says if the trailer is reported multiple times, it is likely be removed.
Earlier the ‘Saand Ki Aankh’ actor shared the first trailer of the flick, which raised the social issue of domestic violence.
Coming from the makers of cinematic marvels like ‘Article 15’ and ‘Mulk’, the film features Ratna Pathak Shah, Manav Kaul, Dia Mirza, Tanvi Azmi, and Ram Kapoor in pivotal roles.
The film will hit the theatres on February 28 this year. (ANI)