Choosing partners in doubles’ tennis is something I instinctively know: Leander Paes 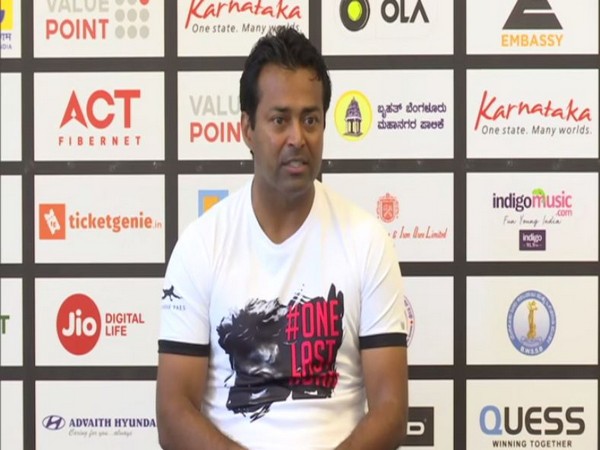 Bengaluru (Karnataka) [India], Feb 11 (ANI): Indian tennis veteran Leander Paes on Tuesday said that he has always had an instinct towards choosing his partners for the doubles event. The tennis star further laid out the important qualities, which he thought should exist between doubles partners.
“So, choosing partners is something I instinctively know. It comes from the fact that I know my strengths and weaknesses very well. It is important to know about your weaknesses and then find a partner whose strengths make up for your weaknesses. My strengths should make up for my partner’s weaknesses. The compatibility factor is crucial when it comes to doubles,” Paes told reporters.
“When you are out there in front of a million people, the difference between winning and losing is huge. I think other basic necessities between doubles players are communication, camaraderie, skill set. Every single partner of mine has taught me something,” he added.
On December 25 last year, Paes had announced that 2020 will be his last year on the court. The player took to Instagram to wish fans a Merry Christmas and along with that he also announced 2020 as his farewell year.
“This being said, I want to announce 2020 as my farewell year as a pro tennis player. Firstly, I want to thank my parents for their genetics, guidance, discipline, the environment they created and the unconditional love they have always shown me throughout my life. I would not be who I am without your unstinting support and belief in me. I love you,” Paes wrote in a post.
“I am looking forward to the 2020 tennis calendar where I will be playing a few select tournaments, travelling with my team and celebrating with all my friends and fans around the world. It is all of you who have inspired me to become me and I want to take this year to say “Thank you” to you,” Paes wrote.
Paes has won eight doubles and ten mixed doubles Grand Slam titles.
He received the Rajiv Gandhi Khel Ratna award, India’s highest sporting honour, in 1996-97; the Arjuna Award in 1990; the Padma Shri award in 2001; and India’s third-highest civilian award, the Padma Bhushan prize in January 2014, for his outstanding contribution to tennis.
He won a bronze medal for India in singles in the 1996 Atlanta Olympic Games. Paes competed in consecutive Olympics from 1992 to 2016, making him the first Indian and only tennis player to compete at seven Olympic Games. (ANI)

Motivated to build a team for 2021: Leander Paes