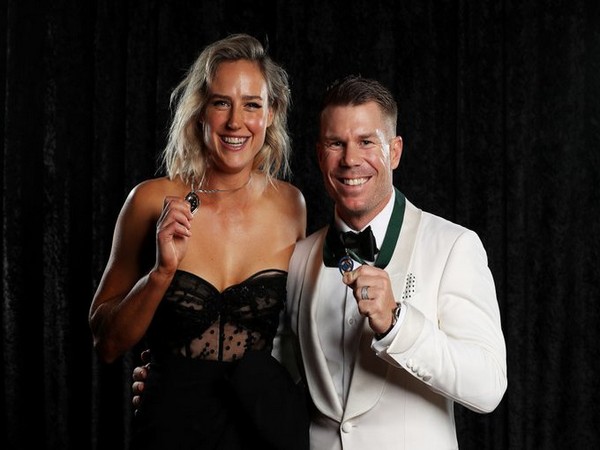 Melbourne [Australia], Feb 10 (ANI): Opener David Warner received Allan Border Medal, while all-rounder Ellyse Perry bagged Belinda Clarke medal in the 2020 Australian Cricket Awards on Monday.
Warner secured his third (2016, 2017, 2019) Allan Border Medal and Perry a trio of Belinda Clarke Awards (2016, 2018, 2019) as voted by their peers, umpires and the media across all forms and every game of international cricket in 2019.
Warner dominated the ICC World Cup with 647 runs including a highest score of 166 at an average of 71.88, including three centuries.
He then rebounded from a challenging Ashes series to dominate at home in the T20I series against Sri Lanka and Pakistan, the Test series against Pakistan – which included his memorable innings of 335 not out in Adelaide – and the Test series against New Zealand.
Warner (194) outpolled Ashes hero Steve Smith by a single vote for the Allan Border Medal with paceman Pat Cummins, the ICC International Cricketer of the Year, third in the polling with 185 votes.
Perry enjoyed an incredible year with both bat and ball, starting with dominant Ashes performances which included an innings of 116 in the Test in Taunton and 11 wickets in the three ODIs.
Her figures of 7-22 at Canterbury were the best ODI figures by an Australian woman’s player.
She backed that up against the West Indies by taking 3-17 in the opening ODI and then scoring 112 not out in Antigua before finishing the year with a solid series against Sri Lanka at home.
Perry (161) was a comfortable winner of her third Belinda Clarke Award from Alyssa Healy (153) and Jess Jonassen (87) taking second and third place respectively in the voting.
Breakout batsman Marnus Labuschagne’s superlative Test summer and Ashes series secured him the Male Test Player of the Year. Having replaced Steve Smith as a concussion substitute in the Lord’s Test, Labuschagne went on to make 353 runs at 50.42 in the Ashes.
His outstanding form continued at home with a first-up 185 against Pakistan at the Gabba and a Test high 215 against New Zealand in Sydney. He scored 347 runs at an average of 173.5 against Pakistan and 549 runs at 91.5 against New Zealand.
Limited overs captain Aaron Finch (38) capped a stellar year by being voted the Men’s One-Day International Player of the Year ahead of Usman Khawaja (33) and Warner (24).
Finch’s year included a massive series against Pakistan in the UAE with 451 runs at 112.75, including knocks of 116, 153 not out and 90. He then dominated the World Cup with 507 runs at 50.7, including 153 against Sri Lanka and 100 against England at Lords.
Warner (19) continued his magical year in the T20I game to become the Men’s T20 International Player of the Year from Glenn Maxwell (16). Kane Richardson and Steve Smith (8) tied for third.
Alyssa Healy claimed top honours as the women’s One-Day International Player of the Year with 39 votes ahead of Perry (33) and Jonassen (19). Healy scored a double by also claiming the women’s T20 Player of the Year with 18 votes, ahead of Jonassen and Meg Lanning who were tied on 15.
It was the second consecutive year that Healy has won the women’s ODI and T20 Awards.
West Australian veteran Shaun Marsh was voted Men’s Domestic Player of the Year with 1322 runs at 52.88 in all forms of the game, including the highest score of 214, while breakout paceman Wes Agar was named the Bradman Young Cricketer for his 41 wickets at 22.62 in the year.
Molly Strano and Tayla Vlaeminck took the prized Women’s Domestic Player of the Year and Betty Wilson Young Cricketer of the Year awards respectively.
Strano took 28 wickets in 22 games while Vlaeminck’s 19 wickets for the year reinforced her enormous potential.
Former Hobart Hurricane Corrine Hall was named Community Champion for her work as an Ambassador of the Kindness Factory, grassroots cricket, and upcoming book Victress, which features 35 iconic female athletes and their stories.
Each portrait is accompanied by the athlete’s story, with a particular focus on how kindness impacted their journey.
The awards for international cricket are based on votes from players, umpires and the media on a 3-2-1 basis from each match. For the domestic awards, the votes are collected from all players. (ANI)