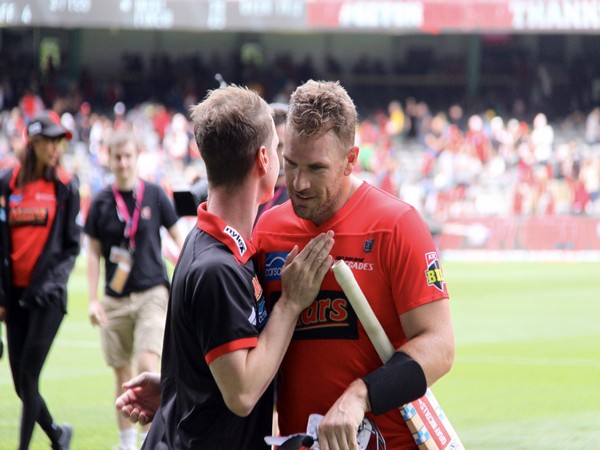 Melbourne [Australia], Jan 27 (ANI): Aaron Finch’s half-century guided Melbourne Renegades a seven-wicket victory over Brisbane Heat in the last league match of the Big Bash League (BBL) on Monday.
Renegades skipper Finch played an unbeaten knock of 63 runs including four sixes and two fours. The side chased down the target of 155 at a loss of three wickets with four balls to spare.
Tom Cooper (23), Daniel Christian (8), and Beau Webster (14) added brief runs to the scoreboard before losing their wickets.
Ben Cutting bagged two wickets while Mujeeb Ur Rahman claimed one scalp.
Earlier, Heat won the toss and elected to bat first. The team got off to a bad start and lost Sam Heazlett (6) early in the second over.
Ben Cutting and skipper Cris Lynn built a partnership of 28-run for the second wicket. Cutting (27) was plumbed in front of the wickets by Will Sutherland.
AB de Villiers failed to make his impact on the scoreboard and departed after scoring six runs.
Matt Renshaw and Marnus Labuschagne stitched a 61-run stand for the fifth wicket. Jack Wildermuth’s direct hit to the stumps ended Renshaw’s 65 runs inning.
Labuschagne played a knock of 28-run before he was sent back to the pavilion by Camron Boyce. For Renegades, Sutherland scalped three wickets and returned with the figures of 3-30 in his four-overs. (ANI)