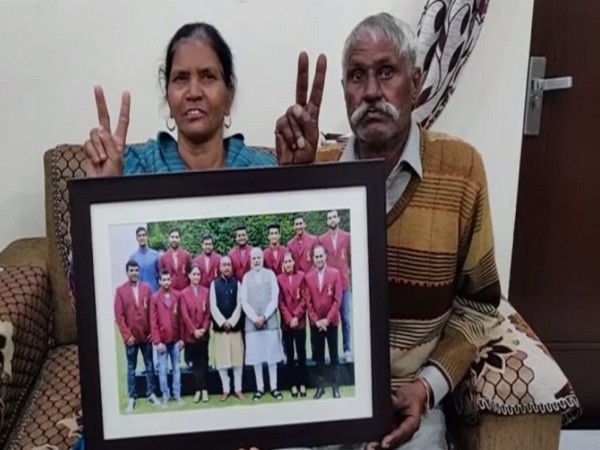 Kurukshetra (Haryana) [India], Jan 27 (ANI): Parents of Indian women’s hockey team captain Rani Rampal beam with pride and joy as their daughter gets shortlisted for the prestigious Padma Shri award.
Rani is one among the six recipients from the sports category who have been conferred with Padma Shri, the fourth highest civilian award in India. She has won over 200 international caps for India.
“We are very happy and proud of our daughter. Before she started playing, we didn’t even know what hockey was. Daughters are achieving greater heights today,” Rani’s father told ANI.
Rani first took to the hockey field in 2003, trained at the Shahabad Hockey Academy under Coach Baldev Singh and made her international debut in 2008. After representing India at the 2010 Commonwealth Games and 2010 Asian Games, she was included in the FIH Women’s All Star Team of 2010.
“She was very dedicated since her childhood. It is a matter of pride for the country and for our family,” said Rammurti, Rani’s mother.
Rani’s contribution was significant in India’s Silver Medal win in the Asia Cup in 2009. At 15, she was the youngest member of the Indian Team that participated at the 2010 Women’s Hockey World Cup in Argentina where she struck a splendid seven goals.
Under her captaincy, India created history as they won the Women’s Asia Cup in 2017 and earned a direct qualification for the FIH Women’s World Cup in 2018. In 2019, under her captaincy, the Indian team won the FIH Women’s Series Final in Hiroshima, Japan.
Rani on Sunday said she is ‘truly humbled and overjoyed’ to get shortlisted for the Padma Shri award.
“I am truly humbled and overjoyed on receiving this news about being shortlisted for the Padma Shri award. We (Indian Women’s Team) are in Auckland, New Zealand for our tournament and I was surprised to receive so many messages from friends, fans and well-wishers informing me about being shortlisted,” Hockey India’s official website quoted Rani as saying.
“This honour is a recognition for women’s hockey in India. We have come a long way in the sport and I truly believe we can achieve greater results,” she added. (ANI)