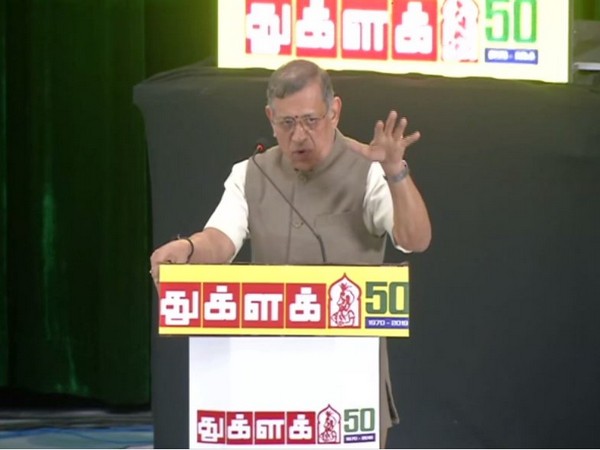 Chennai (Tamil Nadu) [India], Jan 27 (ANI): Six bike-borne assailants on Sunday tried to hurl a petrol bomb at the residence of Gurumurthy, editor of Thuglak magazine in Mylapore.
A case has been registered. Further details are awaited in the matter.
This comes in the backdrop of Rajinikanth’s controversial comments on Periyar EV Ramasamy at the 50th-anniversary event of Thuglak. The veteran actor reportedly said that at a rally led by late Periyar in 1971, idols of Lord Ram and Sita were taken out without any clothes on them and that the deities also featured a garland of sandals.
The actor has refused to apologise for his remarks saying that they were based on reports that have already appeared in the media.
In a recent development, Madras High Court on Friday dismissed a case filed against Rajinikanth over his remarks on Periyar.
On January 15 Gurumurthy had alleged that the “DNA of the Jawaharlal Nehru University (JNU) was against the country” and called for “reform” or “closing down” of the varsity.
“The background in the formation of JNU is anti-India. Its creation was to oppose the country’s forefathers, its traditions, its spirituality and values. In 1969, when the Congress was divided and the Communist party supported Indira Gandhi, they put forward only one request. You (Indira Gandhi) take whatever you want but give us (Communists) education department. Nurul Hasan became the education minister. He was the mind behind the creation of JNU, how it should be created, how it should be run and what ideologies it should incorporate,” said Gurumurthy at an event held to celebrate the 50th foundation day of Thuglak.
Gurumurthy went on to add that the modern times were not the only time when JNU had “turned against the government and the country” and recounted the happenings of 1982.
“It (JNU) later turned against the Congress party, it turned against the country in 1982. It was during that time when police were sent inside the institution and students were thrashed. For 43 days the university was closed down. So it is not happening just today, JNU’s DNA is against this country and everybody knows this. JNU is an institution which needs to be reformed and if it cannot be done, it should be closed down. This is an important fact,” Gurumurthy asserted while speaking in Tamil.
Rajinikanth who was also present at the event heaped praises on the magazine and said, “If someone is seen carrying Murasoli, you can tell that they belong to DMK. If someone is seen carrying Thuglak, you can tell that he’s brilliant.” (ANI)