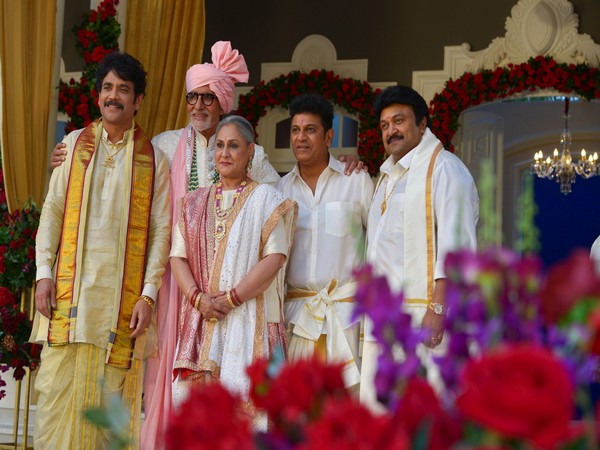 New Delhi [India], Jan 24 (ANI): Bollywood megastar Amitabh Bachchan on Friday revealed new pictures from his upcoming project in which he was seen posing with his wife and senior actor Jaya Bachchan and three superstars from southern India.
The actor took to Twitter on Friday to share the picture with Telugu star Akkineni Nagarjuna, Tamil star Prabhu and Kannada actor Shiva Rajkumar besides Jaya.
Expressing his happiness over sharing screen space with the three stars, Bachchan wrote, “Historic moment for Jaya and me .. 3 superstar sons of 3 Iconic Legends of Indian Film Industry , work together with us .. what honour ..Nagarjun – son Akkineni Nageshwara Rao, Telugu, Shivraj Kumar – son Dr Raaj Kumar, Kannada, Prabhu – son Shivaji Ganesan, Tamil.”
Earlier on Thursday, the legendary actor penned down a post on his personal blog in which he shared more pictures from the shoot of the project.
Besides other actors, Bachchan was also seen with Katrina Kaif who was seen dressed in wedding attire.
According to his blog, Bachchan and his wife are essaying the role of Katrina’s parents in their upcoming project and the pictures showed them marrying Katrina off.
Alternatively, actor Katrina Kaif also shared some pictures from the sets on Instagram on Thursday where she was seen wearing the same wedding attire. (ANI)