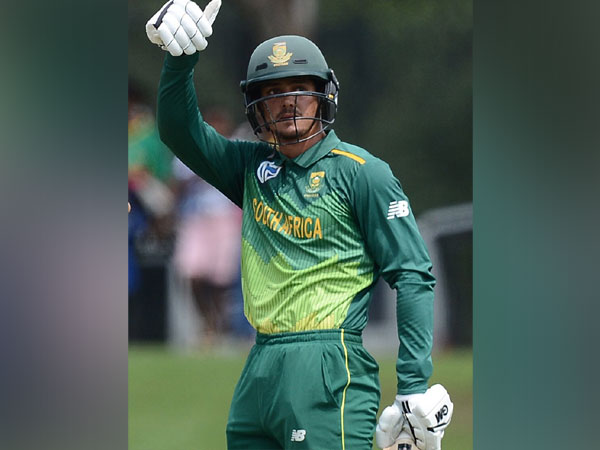 Cape Town [South Africa], Jan 21 (ANI): Wicket-keeper batsman Quinton de Kock on Tuesday was named as South Africa’s ODI skipper for the upcoming series against England.
He has replaced Faf du Plessis as the skipper of the side, and the former captain has not been included in the squad for the upcoming series against England.
Cricket South Africa (CSA) tweeted about the news and said: “Cricket South Africa (CSA) is pleased to name Quinton de Kock (@QuinnyDeKock69) as the new Proteas One-Day International captain. #CSAnews #ProteasODIsquadAnnouncement”. 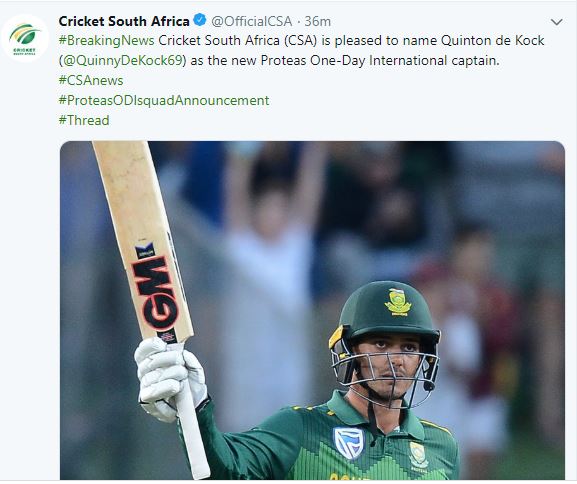 The 27-year-old has played 115 ODIs for the Proteas, managing to score 4,907 runs at an average of 45.01. He has 14 tons to his credit in the 50-over format.
De Kock had also captained South Africa’s T20I team for the previous year’s series against India.
“We all know the quality of the player that Quinton de Kock has grown to become. Over the years, we have watched him grow in confidence and become one of the top ODI wicket-keeper batsmen in the world,” CSA Director of Cricket Graeme Smith said in an official statement.
For the upcoming ODI series against England, the Proteas have given five newcomers a chance. Lutho Sipamla, Kyle Verreynne, Sisanda Magala, Janneman Malan and Bjorn Fortuin are the uncapped players who have been called up to the side.
Proteas ODI squad for series against England: Quinton de Kock (c), Reeza Hendricks, Temba Bavuma, Rassie van der Dussen, David Miller, Jon Jon Smuts, Andile Phehlukwayo, Lutho Sipamla, Lungi Ngidi, Tabraiz Shamsi, Sisanda Magala, Bjorn Fortuin), Beuran Hendricks, Janneman Malan, Kyle Verreynne.
Currently, South Africa and England are playing each other in a four-match Test series. England has a 2-1 lead over the hosts, with one more match left to play.
After the Tests, both teams will lock horns in three ODIs and three T20Is. The first ODI will be played on February 4. (ANI)