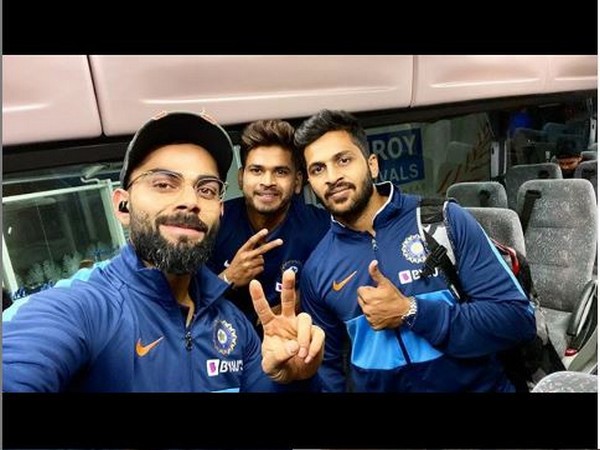 Auckland [New Zealand], Jan 21 (ANI): India skipper Virat Kohli cannot wait to get on with the game after the Men in Blue arrived in New Zealand on Tuesday.
India and New Zealand will lock horns in five T20Is, three ODIs, and two Tests. The first T20I will be played on January 24 in Auckland.
Kohli shared a picture along with Shardul Thakur and Shreyas Iyer on Instagram and captioned the post as “Touchdown Auckland. Let’s go @shardul_thakur @shreyas41”.

The Men in Blue recently defeated Australia 2-1 in the three-match ODI series.
Before the series, skipper Kohli cleared the air regarding as to who will keep wickets in the upcoming T20I series against New Zealand and went on to say that KL Rahul’s wicket-keeping skills serve the balance of the side better.
Regular keeper Rishabh Pant had gotten a concussion in the first ODI of the series, and as a result, Rahul had to keep wickets in the second and third ODI.
In the second ODI, Rahul went on to score 80 runs and has shown good work behind the stumps in the matches that have followed.
Kohli’s words came after India’s 2-1 series win at the M. Chinnaswamy Stadium.
“It definitely allows us to play an extra batsman. It is an important factor while choosing the side. You can look at Rahul Dravid’s example in the 2003 World Cup, when he started keeping behind the stumps, the balance of the side became a lot better and the side was able to play an extra batsman,” Kohli told reporters after the third ODI.
“KL Rahul is open to playing anywhere because he is a proper batsman. He is not a guy who will go slam-bang from ball one, but he can do what he did in Rajkot, he has reflected on what he needs to do in the past six months. It is a boost that he can keep wickets as well,” he added. (ANI)