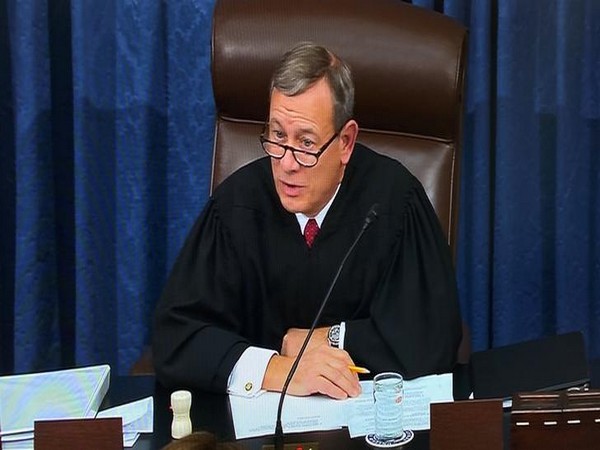 Washington D.C. [USA], Jan 17 (ANI): The historic impeachment trial of President Donald Trump began with preliminary proceedings on Thursday with the swearing-in of 10 senators who will serve as the jury to prosecute the former over two charges of abusing the power and obstructing the Congress.
Supreme Court Chief Justice John Roberts was sworn in for his role in overseeing the process, The Washington Post reported.
The main portion of the trial will begin next Tuesday.
According to Voice of America News, Senate Majority Leader Mitch McConnell said the final step on Thursday will be to notify the White House and “summon the president to answer the articles and send his counsel.”
House Speaker Nancy Pelosi signed the articles of impeachment at a ceremony a day before, moving the process forward after delaying for about a month as House Democrats tried to get Senate leaders to agree to allow testimony from new witnesses during the trial.
McConnell has resisted calling witnesses, saying that decision would come later in the trial.
On Wednesday, the Democratic-led House voted to formally choose the seven impeachment managers who will serve as prosecutors arguing Trump abused his power and obstructed Congress. They include House Intelligence Committee Chair Adam Schiff, Judiciary Committee Chair Jerry Nadler, Administration Committee Chair Zoe Lofgren, Democratic Caucus Chair Hakeem Jeffries, Congresswoman Val Demmings, Congressman Jason Crow and Congresswoman Sylvia Garcia.
Meanwhile, a senior administration official told reporters that the White House is ready for the trial “because the facts overwhelmingly show that the president did nothing wrong.”
White House spokeswoman Stephanie Grisham also reiterated Trump’s defence that he had done nothing wrong.
“He looks forward to having the due process rights in the Senate that Speaker Pelosi and House Democrats denied to him, and expects to be fully exonerated,” Grisham said.
Trump is accused of abusing his power by pressuring Ukraine to investigate former Vice President Joe Biden and his son, Hunter Biden, who served on the board of a gas company in Ukraine, as Trump withheld $391 million in military aid that he later released. The president is also accused of subsequently obstructing a congressional probe into his actions.
No matter what rules are in place for the Senate trial, Trump seems to be safe from the prospect of being convicted and removed from office.
His Republican Party holds a 53-47 majority in the chamber, and conviction requires a two-thirds majority, meaning if all Democrats voted to convict, then 20 Republicans would have to also vote that way for Trump to be convicted and removed from office.
This is the third time in the country’s 244-year history a U.S. president has been impeached and targeted for removal from office.
Andrew Johnson in 1868 and Bill Clinton in 1998 were both impeached by the House but acquitted in Senate trials. A fourth president, Richard Nixon, resigned in 1974 in the face of certain impeachment in a political corruption scandal. (ANI)