Match between Sixers and Hurricanes abandoned due to rain 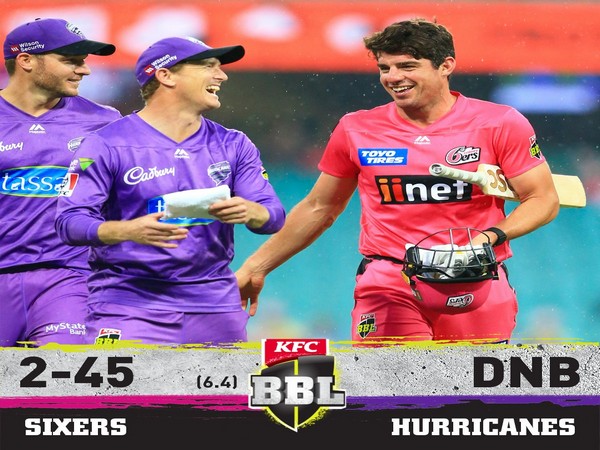 Sydney [Australia], Jan 16 (ANI): The match between Sydney Sixers and Hobart Hurricanes in the ongoing Big Bash League (BBL) was called off due to rain here on Thursday.
Hurricanes won the toss and invited Sixers to bat on. Before rain played a spoilsport and interupped the game, Sixers were at 45/2 in 6.4 overs.
The team had the opening stand of 20-run in 2.5 overs with Josh Philippe departed after contributing seven runs to the total.
James Vince then joined Josh Philippe at the crease. However, in the fourth over Scott Boland dismissed Vince (1), reducing Sixer to 21-2.
Philippe then patnered with Moises Henriques for 24 runs before rain abandoned the game.Philippe remained not out on 26 while Henriques went pavillion unbeaten on 10.
Clive Rose and Scott Boland took one wicket each for the Hobart Hurricanes. (ANI)