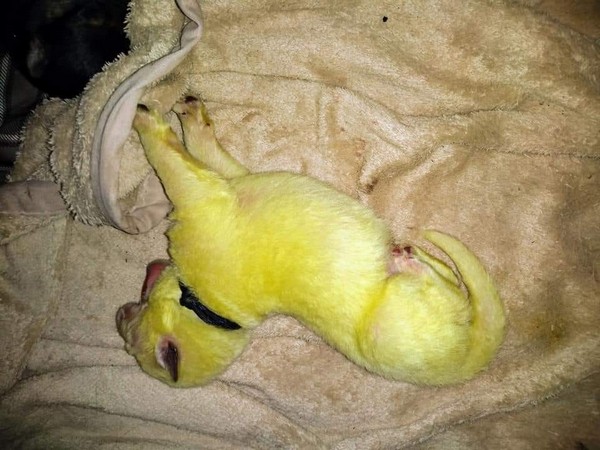 North Carolina [USA], Jan 17 (ANI): A curious case recently surfaced from North Carolina where a female white German shepherd gave birth to a green coloured puppy.
The odd-looking canine that instantly went viral was named “Hulk puppy” on the social media, reported New York Post.
Shana Stamey, the 35-year-old owner of the four-legged curiosity told media that the puppy was the fourth to be born from a litter of eight, and caused a great amount of panic as it came out of its mother’s womb dawning a green coloured coat.
Despite the weird colouration, the puppy is otherwise in perfect health according to veterinarians.
As reported by New York Post, the experts attribute this strange phenomenon to the puppy being covered in meconium, which is the scientific term for the stool which the infant passed while still in the birth sack.
The pup has now actually been named ‘Hulk’ by Stamey while other name suggestions included ‘Gremlin’, ‘Pistachio’, and as its colour started to fade into a yellowish tinge, the name ‘Pikachu’ was also proposed.
The puppy is expected to turn normal after a few baths.
The owner plans to put Hulk and its siblings up for adoption when they reach the appropriate age. (ANI)