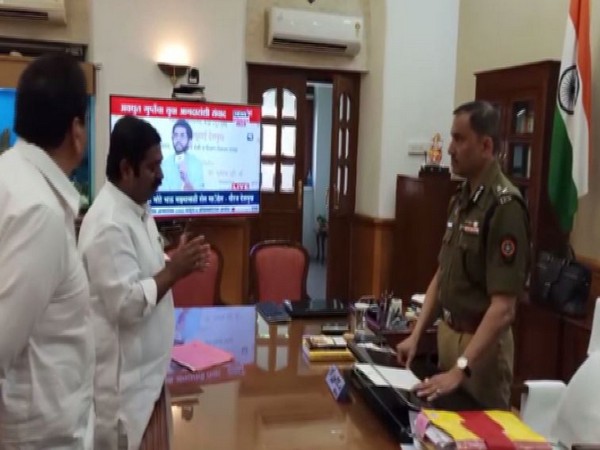 Mumbai (Maharashtra) [India], Jan 17 (ANI): BJP leader Ram Kadam on Friday met Mumbai Commissioner of Police and sought an action to be initiated against Shiv Sena leader Sanjay Raut over his controversial remarks against former prime minister Indira Gandhi and Chatrapati Shivaji’s descendants Udyanraje Bhosale.
Speaking to media persons after the meeting, Kadam said, “I went to the local police station yesterday but no action was taken and that is why I went to meet the Mumbai Police commissioner Sanjay Barve to inform him about the statements made by Sanjay Raut.”
The remarks came a day after several BJP workers staged a protest in front of Ghatkopar police station.
Kadam added, “We have full faith in Mumbai Police but somehow we feel that they are working under the political pressure. If they do not take any actions against Raut, we will go to the Home Ministry.”
He said that the protests will go unabated till the Shiv Sena leader tenders an apology for his remarks on Udyanraje Bhosale, who is now in the BJP.
Raut had stoked a controversy on Wednesday by asking Bhosale to prove that he is a descendant of Shivaji Maharaj. The Shiv Sena leader had also claimed that Indira Gandhi used to go and meet Karim Lala in Mumbai.
“There was a time when Dawood Ibrahim, Chhota Shakeel, Sharad Shetty used to decide who would be Police Commissioner of Mumbai and who would sit in the ‘Mantralaya’. Indira Gandhi used to go and meet Karim Lala. We’ve seen that underworld, now it’s just ‘chillar’,” Raut had said.

Lala was involved in smuggling, narcotics, gambling, forced property evictions, and extortion rackets in Mumbai for over two decades. He died in 2002 at the age of 90.
However, he retracted his remarks on Thursday saying if someone feels that his statement had hurt the image of Indira Gandhiji or hurt feelings, he takes back his remarks. (ANI)