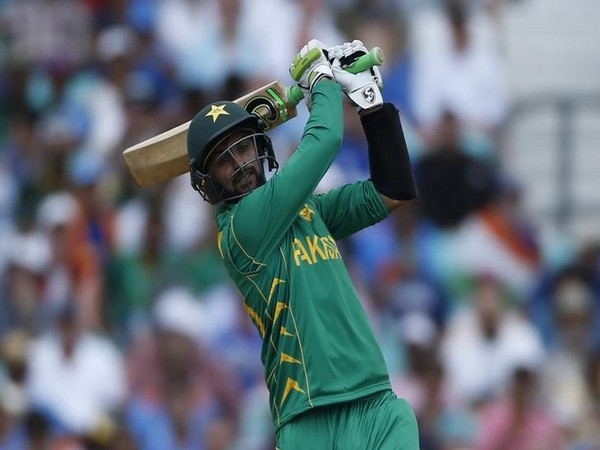 Lahore [Pakistan], January 16 (ANI): Shoaib Malik and Mohammad Hafeez have returned to the Pakistan side for the upcoming three-match T20I series against Bangladesh.
Malik played his last T20 game against Pakistan in February 2019 while Hafeez is returning to the side after a break of 14 months.
Haris Rauf, Ahsan Ali and Amad Ali have got their maiden call for the Bangladesh series.
Asif Ali, Fakhar Zaman, Haris Sohail, Imam-ul-Haq, Mohammad Amir, Mohammad Irfan, and Wahab Riaz have been ruled out of the side following a T20I series defeat against Australia.
Pakistan lost the three-match T20I series against Australia 2-0. The first T20I match was abandoned due to rain.
Skipper Babar Azam said that the experience of Shoaib Malik and Mohammad Hafeez will help the side.
“I am happy with the selected squad and want to thank the selection committee for entertaining my request for Mohammad Hafeez and Shoaib Malik. I believe they still have plenty to offer to Pakistan cricket in the shortest format and their experience can be critical to our performances in the upcoming series,” Azam said in an official statement.
Pakistan squad: Babar Azam (captain), Ahsan Ali, Amad Butt, Haris Rauf, Iftikhar Ahmed, Imad Wasim, Khushdil Shah, Mohammad Hafeez, Mohammad Hasnain, Mohammad Rizwan (wicketkeeper), Musa Khan,
Shadab Khan, Shaheen Shah Afridi, Shoaib Malik, Usman Qadir.
Bangladesh will play three T20I matches against the hosts on January 24, 25 and 27 in Lahore. (ANI)