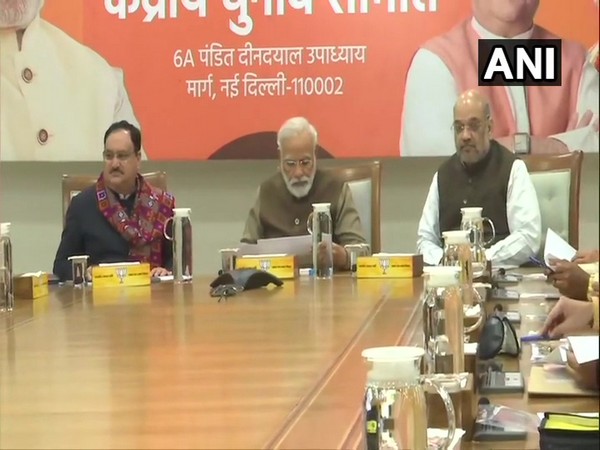 New Delhi [India], Jan 17 (ANI): The meeting of BJP’s Central Election Committee (CEC) under the leadership of Prime Minister Narendra Modi at the party headquarters concluded here late night on Thursday.
The meeting was held to decide party candidates for the ensuing Delhi elections and according to sources all 70 names for Delhi Assembly election were discussed in the meeting and the party is likely to release its first list of candidates on Friday.
Home Minister Amit Shah, Defence Minister Rajnath Singh, Road Transport and Highways Nitin Gadkari and senior leaders including BJP working president JP Nadda and Delhi Pradesh BJP President Manoj Tiwari were present in the meeting.
According to BJP sources, the party will hold a total of 5000 small and big public meetings in the national capital.
The BJP has been out of power in Delhi for the last 20 years and faces a tough challenge in the forthcoming polls. It had won 3 seats in the last assembly election.
The ruling Aam Aadmi Party has already declared its candidates for 70-member Delhi assembly. Congress is expected to announce its candidates in the next few days.
The process of nominations began on Tuesday and will end on January 21. Polling will be held on February 8 and counting of votes will take place on February 11. (ANI)