Washington D.C. [USA], Jan 15 (ANI): Novelist Stephen King recently stirred up a hornet’s nest after he wrote a Tweet expressing his reservations against considering “diversity in the matters of art.” This post was written specifically in the context of the Academy Awards nominations. 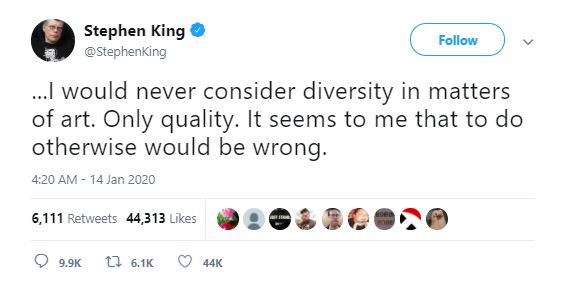 In the tweet, he wrote: “…I would never consider diversity in matters of art. Only quality. It seems to me that to do otherwise would be wrong.”
According to the New York Post, the tweet attracted a barrage of scathing comments from several users, which also included “When They See Us” director Ava DuVernay, an advocate of diversity in Hollywood. She Retweeted: “When you wake up, meditate, stretch, reach for your phone to check on the world and see a tweet from someone you admire that is so backward and ignorant you want to go back to bed. “
Another user commented: “Sir, respectfully saying you as a white man can’t really say that. You had more advantages and opportunities than a person of color would have. They have been wrongfully held back in so many ways just because of their color skin.”
While on the other hand, one user seemed to defend the novelist: “Respectfully, you should probably read up on King’s background and struggles. Furthermore, it would seem to me that his point was about the aesthetics of art and not its popularity.”
The controversial statement comes amid Hollywood’s push to better represent people from diverse demographics.
Also, the 2020 Oscar nominations for best director, which included only white men, triggered off the #OscarsSoWhite hashtag campaign.
Oscars has also been blamed in news articles for discriminating against women in the Best Director’s category, reported the New York Post.
King eventually conceded to all the thrashing and responded a few hours later by tweeting: “The most important thing we can do as artists and creative people is make sure everyone has the same fair shot, regardless of sex, color, or orientation. Right now such people are badly under-represented, and not only in the arts.”
He further added to this point in the next tweet that read: “You can’t win awards if you’re shut out of the game.” (ANI)

Weinstein used to yell at people on the phone, says potential juror