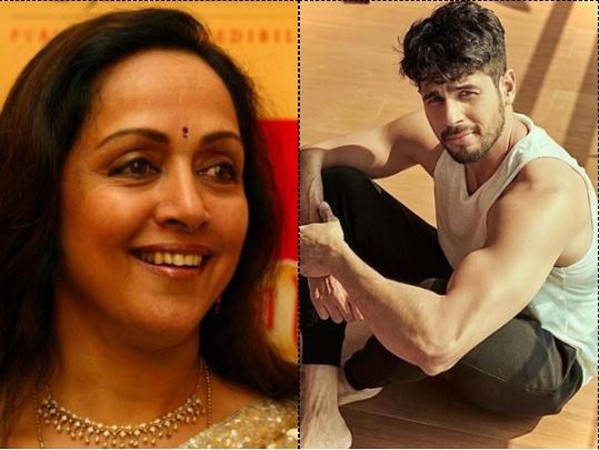 New Delhi [India], Jan 15 (ANI): Actor-turned-politician Hema Malini and Bollywood actor Sidharth Malhotra recalled the great achievements of our armed forces and extended their wishes on social media on the occasion of Army Day on Wednesday.
The 71-year-old actor extended her wishes of the Army Day on Twitter, writing: “Today is the 72nd Army Day. Army Day is celebrated on January 15 every year, to commemorate the day when (then) Lieutenant General KM Cariappa took over from General Sir Francis Butcher as Commander-in-Chief of India on January 15, 1949.” 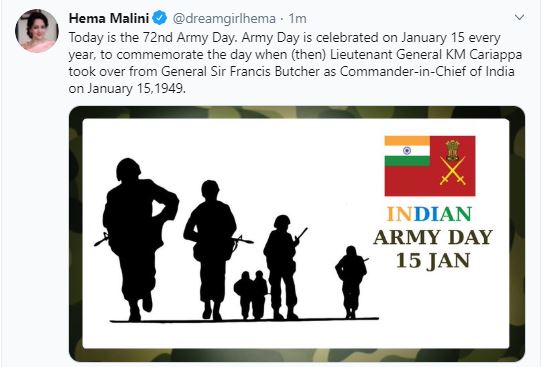 Addressing our army and the innumerable sacrifices they made for the country, the ‘Sholay’ actor tweeted another post that reads: “On Army Day let us take time to pray for our ever-vigilant army & recall the sacrifices that have been made in their line of duty, protecting the motherland. Ever grateful to all the soldiers who undergo immense hardship & who are ready to lay down their lives for the country.” 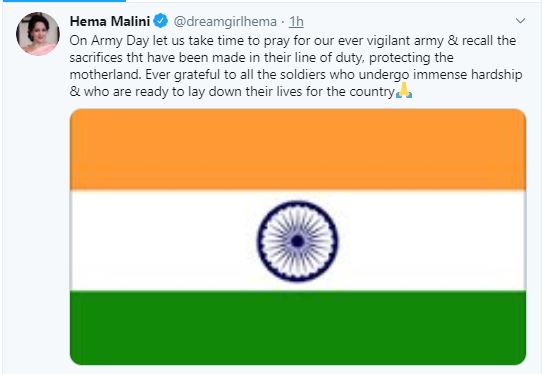 She also tweeted the posts alongside the Indian National Flag.
Earlier today, the ‘Baar Baar Dekho’ star Sidharth Malhotra extended his wishes on Twitter to mark the special day.

Recalling his interaction with the armed forces last year, the 34-year-old actor wrote: “A big salute to all our soldiers for their courage, valor and boundless determination! After interacting with them closely last year I’ve realised that it’s truly the most selfless profession. We can’t thank them enough for everything they do for our country, Jai Hind! #ArmyDay.” (ANI)

‘Chhapaak’ one of most important films of our time, says Janhvi Kapoor

After Katrina Kaif, Bhumi Pednekar takes up ‘What is in your Dabba’ challenge