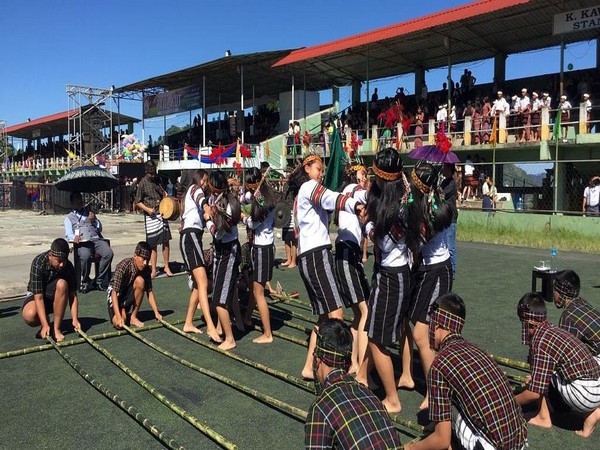 Aizawl (Mizoram) [India], Nov 21 (ANI): Festive spirit gripped the northeastern state of Mizoram as people celebrated the most widely observed harvest festival, Pawl Kut.
The festival which is mostly celebrated by Kuki, Chin and the Mizo Tribes follows the end of the harvest season in the state. This year Pawl Kut was marked with the aim to revive the rich Mizo culture.
The State Art and Culture Department (SACP) assisted the people in celebrating the festival by organising an event at the Lammual ground here on November 14 and 15 along with the help of Social Welfare Department of Mizoram.
The organiser of the event, K. Vanlalzawni talked about the traditional festival which is associated with children and described the purpose of celebrating the festival this year at a larger scale.
“With this festival, we expect that the culture of Mizo will be revived within the children. In the olden days, children used to dress up in cultural attires. At the celebration also, the children came in very festive costumes,” revealed Vanlalzawni.
The origin of Pawl Kut dates back to a period when people of Mizoram used to live on the bank of the River Tiau around 1450 to 1700 AD. It is said after a severe famine affected the state for a few years, the people happen to found a bumper crop.
From then onwards, people celebrate Pawl Kut as an act of thanksgiving to the Almighty for giving a bountiful harvest.
As a part of the celebration, a painting exhibition titled ‘Plastic-free Aizawl’ and ‘Preservation of water resources’ was also organised at Aijal Club.
More than 85 students participated in the competition. The Deputy Chief Minister of Mizoram Pu Tawnluia attended the carnival as ‘Kut Pa’ (Father of the Festival) and later presented awards to children.
Mizo indigenous games, photography exhibition, handloom, activities for the differently-abled, painting competition, a cultural competition, and a food park were the main highlights of the two-day-long festivity.
Minister Dr K Beichhua, who attended the festival as Kut Thlengtu (host), also expressed delight over the revival of the festival by the government.
“I am very grateful the Mizoram government organised this festival as such festival help in promoting the rich and diverse culture of the state. During this Pawl Kut, it is very delightful to see that children get lots of enjoyment. And I also thank the government for organising the event at such massive scale,” said Beichhua.
A few days before the feast, the men go hunting as it is customary to consume meat and eggs as part of the ceremony. (ANI)

I like Shabana Azmi for her expression about unity, diversity: Mamta Banerjee at KIFF